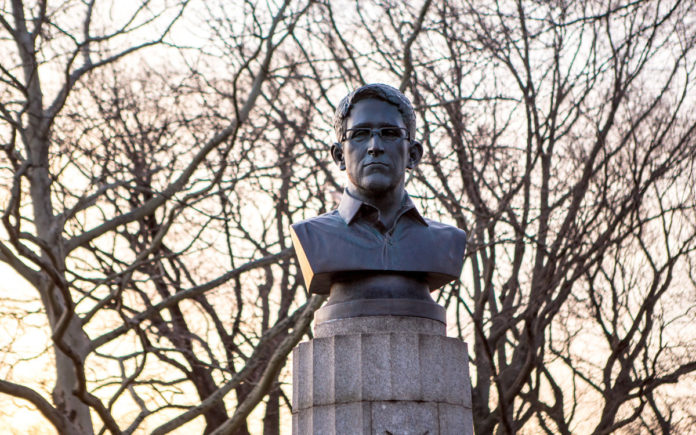 A large, illegal, 4-feet high, 100-pound sculpted bust of National Security Agency whistle-blower Edward Snowden suddenly appeared on Monday morning atop a column at the Prison Ship Martyrs Monument in Brooklyn’s Fort Greene Park, a memorial to American prisoners of wars who lost their lives during the Revolutionary War.

The artists, who created the statue to recognize the sacrifice made by Snowden in the fight against modern-day tyrannies, allowed AnimalNewYork.com to document the installation of their work.

“It would be a dishonor to those memorialized here to not laud those who protect the ideals they fought for, as Edward Snowden has by bringing the NSA’s 4th-Amendment-violating surveillance programs to light. All too often, figures who strive to uphold these ideals have been cast as criminals rather than in bronze,” said the New-York based artists. In a statement, they appealed to the city to embrace and protect the piece:

NYC has a long history of welcoming artists and the challenging discourse their works usher in. In keeping with this tradition, we hope New York will embrace and protect this piece, much as when the “Wall Street Bull” was granted a permanent public home after its guerrilla placement. Even though it’s already on its way towards being removed, the possibility exists for the city to make the piece available for public viewing in a sanctioned way. Our additional hope is this gift has brought a renewed cultural relevance to the space, inspiring more visitors to ponder the sacrifices made for their freedoms and their responsibility to ensure our liberties last long into the future.

“This is a guy who some of the traditional mass media has portrayed as a traitor, or a terrorist, and the very same thing would have been said about these POWs in the Revolutionary War times. But with 200 years of perspective, we realized they were fighting for something all of us are very grateful for. We hope it will shift people’s perceptions, or open their eyes, that there could be a different story than what they’ve been told,” they told Mashable.