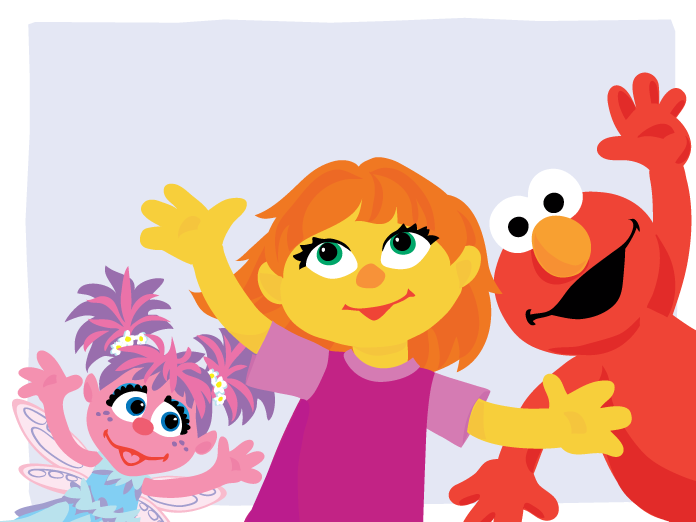 To reduce the stigma associated with autism, Sesame Workshop — a nonprofit educational organization behind Sesame Street, America’s long-running children’s television series — has introduced Julia, a green-eyed, orange-haired character with autism, as part of their “Sesame Street and Autism: See Amazing in All Children” initiative aimed at communities with children ages 2 to 5.

As per Centers for Disease Control and Prevention, 1 in 68 children in America has autism spectrum disorder.  The National Autistic Society reports that 40% of children with autism have experienced bullying at some point in their lives. Sesame Street’s latest initiative aims to educate autistic children, as well as their parents and the general public, on how to have successful interactions with each other. In the storybooks, Julia explains to Elmo, her Sesame Street friend, how she likes to play and do things a little differently. Dr Jeanette hopes Julia and Elmo’s friendship can put a dent in bullying from an early age:

“This is what makes our project so unique. When we explain from a child’s point of view that there are certain behaviors, such as slapping their hands or making noises, to express excitement or unhappiness, it helps younger children to understand how to interact with their autistic peers. It makes children more comfortable and therefore more inclusive.”

“Debuting a confident, inquisitive, and sweet Afghan girl character is a perfect opportunity to engage both boys and girls with lessons supporting girls’ empowerment and diversity appreciation as we aim to help all children in Afghanistan grow smarter, stronger, and kinder.”

Research by Global Rights estimates that almost 9 out of 10 Afghan women face physical, sexual or psychological violence, or are forced into marriage mostly by their own families. Sherrie hopes that the Afghan Muppet will become a strong role model for girls in Afghanistan, the war-torn Asian country in which women continue to suffer oppression and abuse, even after the fall of the Taliban 14 years ago:

“The new Muppet is a way for children of both sexes to identify with a strong young character. It’s a way of making sure we are not just teaching but we are modeling, which is very powerful. Research has found that depictions of confident, educated girls have helped shaped boys’ opinions as well… We know children learn best when they can identify themselves with characters on the screen.” This article (Sesame Street Introduces Julia, Its First Muppet With Autism) is a free and open source. You have permission to republish this article under a Creative Commons license with attribution to the author and AnonHQ.com.