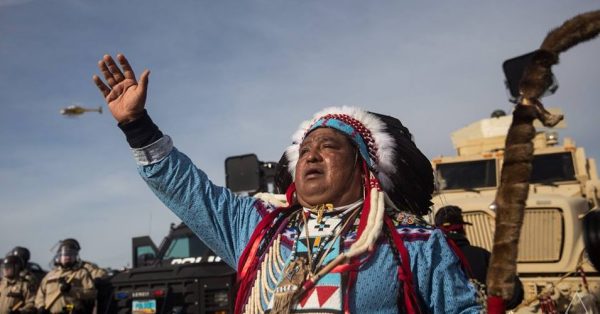 After receiving notice of the US Army Corps’ plan to evict peaceful protestors from their camps, Sioux tribal leaders have responded with dignity and defiance, promising to stay put in defense of their land and people.

Throughout the months of protests against the controversial Dakota Access pipeline project, the federal government has tried to “spin” its indirect support for the project in order to quell national outrage and prevent further growth of the resistance movement. In September, the Department of Justice ordered a temporary halt to all construction on the pipeline as the government “reconsidered” its approval for the project. However, construction never stopped as the injunction was voluntary and Energy Transfer Partners, the pipeline’s parent company, continued building. Then again, last month, the US Army Corps of Engineers ordered another temporary halt on construction, which was also ignored, while the Corps held “talks” with the tribes leading the resistance.

This past Friday, the federal government finally made its intentions public when the Corps sent a letter to Sioux tribal leaders, telling them that their camps of peaceful protestors and water protectors would be evicted to protect “the general public.” To add insult to injury, the Corps’ commander told the protestors they could move to an officially sanctioned “free speech zone” away from the construction site. These hollow words are clearly more “spin” designed to distance the government from its obvious, though indirect support of the $3.8 billion pipeline project.

Tribal leaders have now responded to what they termed the Corps’ “direct and irresponsible threat to the water protectors.” The Cheyenne River tribe, who are co-litigants in a lawsuit against the pipeline, sharply rebuked the plan, citing that the area on which the targeted camps lie are Sioux territory per the 1851 Fort Laramie treaty signed by the Sioux and the US federal government. Their leader, Harold Frazier, also pointed out that much of the Sioux’s territory had been illegally claimed by the Corps via the Pick-Sloan Flood Control Act, lamenting the US government’s habit of ignoring the numerous treaties it has signed with the indigenous tribes within its borders. The leader of the Standing Rock Sioux, David Archambault II II also seconded this statement, saying that the news of the eviction notice was “saddening” but not surprising considering the US government’s historical treatment of indigenous people. Frazier said that, in light of the government’s failure to respect tribal land or autonomy, that his tribe and their allies “will no longer allow our rights as a Tribe or as indigenous people as a whole to continue to be eroded.”

Frazier also argued that the Corps’ notice “appears to further empower the militarized police force that has been brutalizing and terrorizing our water protectors while imposing the blame and risk on unarmed peaceful people.” He called the Corps’ decision “a grave and dangerous mistake” and said that the protestors would not be leaving their camps regardless of the threat of removal. When the Army Corps’ enforces its eviction notice on December 5th, they will be greeted with peaceful resistance, civil disobedience, and prayer. However, groups of military veterans from around the US are set to arrive at the camps to protect protestors on December 4th, a day before the eviction notice takes effect. This could make for a truly explosive confrontation between the Americans who have chosen to fight for their beliefs and those who have chosen to back the will of the state and corporations.

This article (Sioux Tribe Leaders Respond To Army Eviction Notice Of #NoDAPL Camp, Refuse To Give Up) is free and open source. You have permission to republish this article under a Creative Commons license with attribution to the author and TrueActivist.com