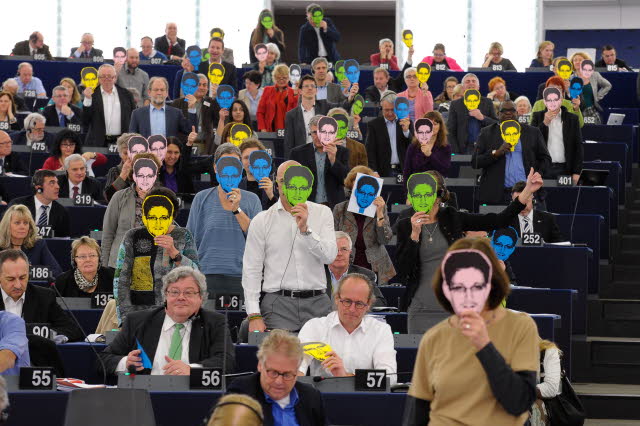 Most of the European Parliament’s members have voted in favor of asking its member nations to grant protection to the NSA whistleblower, Edward Snowden. The man himself has called this a  ‘game-changer’ and a ‘chance to move forward’.

The MEPs have asked EU member nations to “drop any criminal charges against Edward Snowden, grant him protection and consequently prevent extradition or rendition by third parties, in recognition of his status as whistle-blower and international human rights defender,” according to a European Parliament press release.

“This is not a blow against the US Government, but an open hand extended by friends. It is a chance to move forward.”

This tiny majority is yet reason to celebrate, as it symbolizes something far greater: “The resolution of the EU parliament is recognition of Edward’s [Snowden] merits to the mankind, his courage and honesty of his position” said Snowden’s lawyer, Antony Kucherena.

The EU parliament had a keen look at Snowden’s revelations, having received a testimony from Snowden on spying last year, and by March of last year had adopted a resolution to defend the personal information of its EU citizens.

“The European Parliament’s inquiry into Edward Snowden’s revelations of electronic mass surveillance was the most comprehensive investigation completed to date. This work needs to continue to ensure that civil liberties are defended on the internet too,” Claude Moraes of the Progressive Alliance of Socialists and Democrats (S&D), Chair of the Civil Liberties Committee and rapporteur on mass surveillance said.

MEPs say that they are not satisfied with the actions, or lack of thereof, taken after their inquiry.

“EU citizens’ fundamental rights remain in danger” and “too little has been done to ensure their full protection,” the MEPs said.

The European Commission has also been called upon by the Parliament to “immediately take the necessary measures to ensure that all personal data transferred to the US are subject to an effective level of protection that is essentially equivalent to that guaranteed in the EU”.

It seems the Parliament is worried about certain “recent laws in some member states that extend surveillance capabilities of intelligence bodies” (as observed in France, the UK and the Netherlands) as well as “revelations of mass surveillance of telecommunications and internet traffic inside the EU by the German foreign intelligence agency (BND) in cooperation with the US National Security Agency (NSA)”.

MEPs have also requested that EU organisations come up with a method of increasing the technological independence of the Union, improving online privacy while allowing the public greater control over what intelligence agencies do.

Snowden faces numerous charges in the US, and would have been extradited to face a lengthy sentence, one that would doubtlessly mirror Chelsea Manning’s (formerly Bradley Manning) own 35 year one, were it not for Russia’s offer of asylum. It should be noted that not ONE of Europe’s member nations had accepted or offered to accept Snowden’s request for Asylum.

This Article () is free and open source. You have permission to republish this article under a Creative Commons license with attribution to the author(CoNN) and AnonHQ.com.