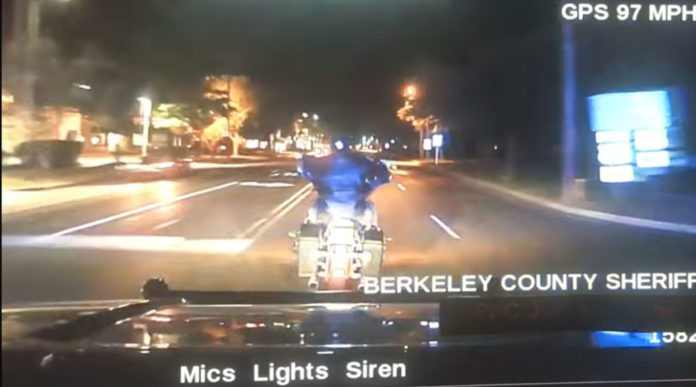 A South Carolina cop murdered a motorcyclist in a high-speed pursuit – and his agency was quick to defend him. Dash cam video was released this week showing a deputy engaged in a high-speed chase with a motorcycle. Near the end of the video, the deputy can clearly be seen ramming the back of the motorcycle twice, causing it to run off the road and crash. The motorcycle driver was killed at the scene and the deputy is out on leave.

Berkeley County Deputy James Vansant was out hunting for speeders when he caught a motorcycle going 20 over the limit. He initiated a traffic stop and the motorcycle proceeded to flee. It isn’t unusual for cops to give chase, but when the conditions of the chase itself pose a greater threat to public safety than the initial crime, the chase should be terminated. The dash cam shows the deputy’s speeds breaking 100 miles per hour at times, a clear sign that the pursuit should end. The motorcycle can be seen braking several times, but the reason for the crash is clear.

Nearing the 5:26 mark in the video, the deputy can clearly be seen accelerating toward the back of the motorcycle. He bumps it, which surprisingly didn’t cause a crash right there. The motorcycle rider, identified as Robert Lee Clark Jr., gets pushed forward before drifting off the right side of the lane. The officer then again accelerates, striking Clark on the rear left corner of the bike near the saddle bags. The collision was completely intentional as the video demonstrated.

The Berkeley County Sheriff put out a lengthy statement in which they expect the public to ignore the video they saw, and rather, believe their lies. According to the press release:

At no time near the moment of impact do Clark’s brake lights activate. The statement also ignores the fact that the officer accelerated toward the bike leading up to the impact. It was an intentional ramming, which violates the department’s own policies. According to the agency themselves, it is against policy to ram a vehicle during a vehicle pursuit, particularly a motorcycle, unless deadly force is warranted, which in this case, it clearly was not.

Now is the time when the agency is going to go into overdrive to explain to the public how the deputy didn’t ram the motorcycle and that our eyes our lying to us. Deputy Vansant is out on paid vacation pending a thorough investigation, however, expect him to be back on the streets without discipline in no time.

This article (South Carolina Cop Kills Motorcyclist During Pursuit – Agency Jumps to His Defense) is a free and open source. You have permission to republish this article under a Creative Commons license with attribution to the author and AnonHQ.com.