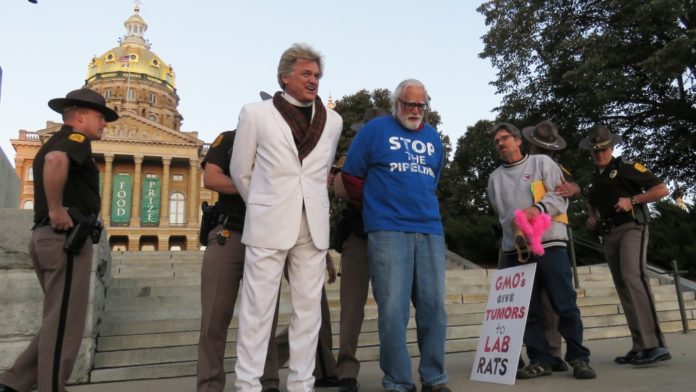 In what is being described as an “unusual move” (horrifying might be a better word), the State of Iowa has asked the Polk County District Court to disqualify activists William Talen, better known as Reverend Billy, and Frank Cordaro from the use of their First Amendment rights after being arrested for protesting a Monsanto party. Should the court approve the request, a terrifying precedent could be set in which US citizen’s (with a focus on protesters) voices are completely silenced in a court of law.

Last October, Monsanto rented out the Capitol building for their party (you read that right), and after peacefully approaching police to speak with them further at the steps of the Capitol, the activists were arrested and charged with misdemeanor trespassing. It’s relevant to note the men were located on a public sidewalk.

Reverend Bill and Frank Cordaro are well-known Iowa peace activists with a long history of organizing protests. Monsanto is a frequent target due to their use of the controversial chemical, Glyphosate, however the EPA has been a recent focus of the activists as well. In a statement from New York City criminal defense lawyer, Martin Stolar:

“I’ve been doing protest demonstration cases for 25 years, and the First Amendment is always an issue. It’s pretty outrageous that they are trying to remove it in this case.”

This article (State of Iowa Stripping First Amendment Rights from Monsanto Protesters) is a free and open source. You have permission to republish this article under a Creative Commons license with attribution to the author and AnonHQ.com.