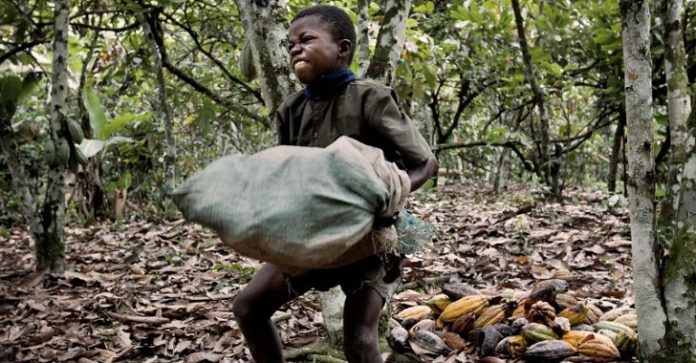 On Monday, the Supreme Court ruled a lawsuit filed by former child slaves against mega-corporation Nestle can move forward. The decision finalizes a lower court’s prior ruling, which Nestle previously attempted to overturn in an attempt to halt suits from individuals who worked in the African cocoa trade as children.

As Reuters reports, three former Malian child laborers, known as “John Does” in the case, “contend the companies aided and abetted human rights violations through their active involvement in purchasing cocoa from Ivory Coast. While aware of the child slavery problem, the companies offered financial and technical assistance to local farmers in a bid to guarantee the cheapest source of cocoa, the plaintiffs said.” West African nations are some of the largest exporters of cocoa, and though Nestle does not employ child slaves directly, the company consistently engages in business deals with farmers who do.

Though Americans are largely unaware of the sources of their chocolate, the use of child labor and slavery in African cocoa production has been public knowledge for many years. A 2000 documentary, Slavery: A Global Investigation, detailed the perilous conditions children face in West African nations. As Anti-Media summarized:

“Nineteen children freed from slavery near the Ivory Coast  — and their new guardian — detailed the staggering conditions of the cutthroat trade: the young children worked ‘from dawn until dusk every day’ and were forced to sleep in small sheds. They were given a tin cup in which to urinate. The children endured a six-month ‘breaking in’ process which included regular beatings. Sadly, they had difficulty understanding why they were not paid for their hard labor, which included carrying 100-pound bags of cocoa beans and, often, exposure to hazardous conditions.”

When the story of the abused children garnered significant public attention, the candy companies claimed they were unaware of any such conditions.

“[N]o one, repeat, no one, had ever heard of this,” then-Senior Vice President of Hershey’s, Robert M. Reese toldthe Philadelphia Inquirer in 2001. “Your instinct is that Hershey should have known. But the fact is we didn’t know.”

Though Nestle, Hershey, Mars, and other chocolate behemoths voluntarily vowed to solve the problem — evading impending congressional legislation that would have forced the issue — they dragged their feet, repeatedly earning time extensions from lawmakers. To this day, Nestle touts its investments in supporting local farmers and helping children — yet the practice still continues.

A 2015 study sponsored by the Department of Labor and executed by researchers at the Payson Center for International Development at Tulane University found the percentage of children working in the cocoa industry in the Ivory Coast increased 51% from 2008-09 to 2013-14. Though some areas saw improvement, the overall conclusions of the study revealed candy companies had failed to eliminate child labor from their business models. In 2014, over two million children still worked in hazardous conditions in Côte d’Ivoire and Ghana, combined.

Monday’s Supreme Court ruling dealt with a 2009 lawsuit filed by three Malians who attempted to sue Nestle and other chocolate manufacturers under the Alien Tort Statute. They alleged forced labor, whipping, beating, and other hazardous conditions.  In 2010, a U.S. District Judge dismissed their case, arguing corporations may not be sued under the Alien Tort Statute.

In December 2013, however, a divided Ninth District Court found the former child laborers may having standing to sue. In September 2014, Judge Dorothy Nelson of the Ninth Circuit Court of Appeals for the Central District of California confirmed that ruling. She wrote:

Nestle fought to appeal this decision, which the Supreme Court dismissed on Monday.

Many corporations have evaded similar charges based on the Supreme Court’s 2013 ruling in Kiobel v. Royal Dutch Petroleum Co., which involved 12 Nigerians who accused Royal Dutch Shell of aiding state-sanctioned violence and torture. The court ruled, as Reuters reported, that “the 1789 Alien Tort Statute was presumed to cover only violations of international law occurring in the United States.” The Supreme Court dismissed the Nigerians’ case, establishing a precedent.

Though the Supreme Court decided differently on Monday, dismissing Nestle’s appeals, the ruling is still no guarantee the case will continue. According to the Ninth Circuit appellate decision, however, as the Wall Street Journal summarized, the plaintiffs “should have the opportunity to amend their lawsuit before judges decide whether their claims can go forward under the new rules announced by the Supreme Court in 2013 [in Kiobel v. Royal Dutch Petroleium Co.].”

While lawsuits may eventually help some victims achieve a modicum of justice for the treatment they endure, some believe that is not enough, as the strong demand for chocolate continues to fuel the practice. Miki Mistrati, who made the documentary Shady Chocolate in 2014, places partial blame on consumers. “Consumers have not been critical enough,” he said. “They have not asked why a chocolate bar only costs $1 when the cocoa comes from Africa. Customers have been too easy to trick with smart ads.”

Slavery: A Global Investigation from Free the Slaves on Vimeo.

The ongoing dilemma was perhaps best summarized by a former child slave featured in Slavery: A Global Investigation: “They enjoy something I suffered to make,” he said. “I worked hard for them but saw no benefit. They are eating my flesh.”

This article (Supreme Court: Former Child Slaves Used in Cocoa Production Can Sue Nestle) is free and open source. You have permission to republish this article under a Creative Commons license with attribution to Carey Wedler andtheAntiMedia.org. Anti-Media Radio airs weeknights at 11pm Eastern/8pm Pacific. If you spot a typo, email[email protected].