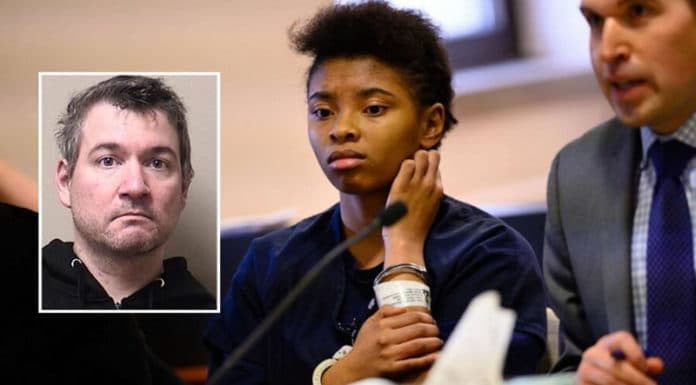 A 19-year-old sex trafficking victim is currently facing life in prison for killing the man who sexually abused her since she was 16.

According to police, Chrystul Kizer was among at least a dozen underage victims who were abused and filmed by Randy Volar without their consent. In fact, these videos were discovered by police four months before Volar was shot and killed.

Volar was reportedly arrested in early 2018 on charges of child enticement, using a computer to facilitate a child sex crime, and second-degree sexual assault of a child. Police recovered photo and video evidence of him abusing multiple underage girls, including Kizer. However, for some unknown reason, Volar was released the very next day without bail, allowing him to continue his abuse.

Months later, on June 5, Kizer shot Volar twice in the head before setting his body on fire and leaving the scene in his BMW. She was later found by police in nearby Milwaukee and linked to the murder through the vehicle. She eventually confessed after giving officers multiple explanations of her innocence.

District Attorney Michael Graveley, who failed to bring Volar to justice for his crimes against children, decided to charge Kizer with first-degree murder, carrying a potential life sentence, arguing that the killing was premeditated. The district attorney’s office has even attempted to hide the evidence of abuse from the defense, arguing that it was not relevant to the case.

Kizer says that she was drugged by Volar on the night of the incident and that he was attempting to rape her when she shot him in self-defense. Earlier this month, a judge ruled that she would not be able to use an “affirmative defense” law which allows victims of sex trafficking to claim self-defense in situations like this.

According to a report from the Washington Post, Volar and Kizar met online through an escorting website and began a somewhat consensual relationship, despite the fact that Kizer was just 16. Volar was extremely generous at first, giving her expensive gifts as well as money to take home to her family. However, he quickly became more controlling of her and eventually began taking over her life and finances, positioning himself as her pimp.

When Kizer tried to distance herself from Volar, he became more aggressive.

“He had started to talk violent and stuff. I was going to stop talking to him, and he said if I did that he was going to kill me,” she told investigators.

A month before the shooting, another man that Kizer was involved with, Delane Nelson, gave her a handgun to protect herself in case Volar decided to follow through on his threats.

Then on the week of the shooting, Kizer became distrustful of Nelson, and with nowhere else to go, ended up back at Volar’s house. She says at some point during her visit she realized that she had been drugged, and Volar began touching her. She does not remember many details about what happened next, but vaguely remembers the gun going off. She says she does not remember starting the fire, which is what ended up bringing police to the scene.

A final search of Volar’s home and assets found computers with a large number of child exploitation videos and photos in which he can be seen having sex with girls who were as young as 12. Investigators also found a bank account with $1.5 million in transfers, which is likely tied to his trafficking and child pornography activities.

In early 2019, Tennessee Governor Bill Haslam granted clemency to Cyntoia Brown, a woman who spent the last fifteen years in prison for a murder she has consistently maintained was an act of self-defense, according to the Mind Unleashed.