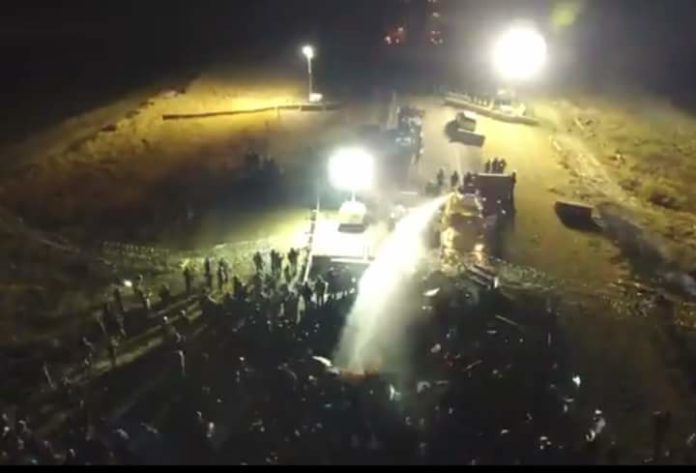 In an attempt to re-open a blocked bridge in Cannonball, ND, protestors were assaulted by militarized police, tear gas, and water cannons in below freezing temperatures, leading to multiple injuries.

As the controversial Dakota Access nears completion despite a government injunction on its construction, police violence against protestors is spiraling out of control. Last night, militarized police forces assaulted protestors opposing the pipeline with concussion grenades, tear gas, rubber bullets, and water cannons despite the below freezing temperatures. The incident took place on the Backwater Bridge near the Oceti Sakowin encampment. The bridge has been closed since late October when a clash with protestors and police in riot gear led to its forcible shut down by the authorities. The protestors were attempting to clear the bridge as they claim the blockade prevents aid and supplies from reaching their encampments and that it is harming the local economy of nearby Cannonball, ND.

After a brief confrontation with police, protestors allegedly succeeded in removing some vehicles from the highway blockade. Soon after, heavily militarized police appeared, who targeted the protestors in an all-out assault. Tear gas, pepper spray, concussion grenades, rubber bullets were used on the protestors, despite the below freezing temperatures, in a police attempt to clear protestors from the bridge. By midnight, an estimated 167 protestors were injured. Medics confirmed that a 13 year old girl was shot in the face, though they did not confirm if it was a rubber bullet or live ammunition. Medics on site also said that police had targeted the face and legs of protestors. Seven were eventually hospitalized, three of whom are said to be elders of the Standing Rock Sioux, the tribe that has led the protest against the pipeline. One of the elders suffered cardiac arrest at the scene, though medics successfully resuscitated him, though he remains in critical condition. The assault was live-streamed on Facebook though Facebook eventually cut off the feed. The brutality has already generated a firestorm of outrage and criticism on social media as the increasingly violent crackdowns on the peaceful protestors have become a national disgrace.

The great irony in all of this is that many Americans are gearing up to celebrate Thanksgiving, a holiday meant to celebrate the “teamwork” shared between Native Americans and European colonists. Despite the cheerful façade that this holiday publicly portrays, Native Americans live in some of the most impoverished communities in the Western world after suffering centuries of criminal exploitation by both corporations and the federal government. Dakota Access is only the most recent example.

The Pine Ridge Sioux reservation, just miles away from Standing Rock, has the lowest life expectancy in the Western world with 47 years for males and 52 years for females. The infant mortality rate is also five times the US national average. Under these circumstances, the celebration of Thanksgiving is a cultural farce and complete hypocrisy as many of those munching on turkey and stuffing this upcoming Thursday will not be spend even a second reflecting on the centuries-long suffering and violent suppression of Native Americans that continues to this day.

This article (Teen Girl Shot In The Face, Tribal Elders Hospitalized As Militarized Police Assault DAPL Protestors) is free and open source. You have permission to republish this article under a Creative Commons license with attribution to the author and TrueActivist.com