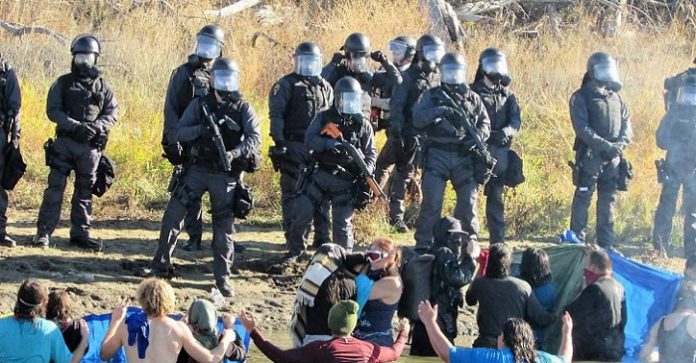 The month-long standoff between Native American “water protectors” and militarized law enforcement saw a dramatic escalation as water cannons, tear gas, rubber bullets, concussion grenades, armored vehicles, and other “less than lethal” weapons were used against the protesters after they cleared an abandoned vehicle that acted as a roadblock on a nearby bridge.

This unprecedented crackdown left hundreds of protesters wounded. According to an official statement from the Standing Rock Medic & Healer Council:

“Approximately 300 injuries were identified, triaged, assessed and treated by our physicians, nurses, paramedics and integrative healers working in collaboration with local emergency response. These 300 injuries were the direct result of excessive force by police over the course of 10 hours. At least 26 seriously injured people had to be evacuated by ambulance to 3 area hospitals.”

Many of the injured suffered from hypothermia after law enforcement doused protesters with water cannons despite sub-freezing temperatures.

But perhaps the most egregious act was when a concussion grenade fired by police struck activist Sophia Wilansky in the arm, tearing it apart. In photos taken after the incident, bone could be seen where the flesh was torn away (photos are not included because they are too graphic). Her arm may need to be amputated due to the injuries.

In light of this overwhelmingly violent crackdown by U.S. law enforcement, one would expect the media to be up in arms with their coverage of Standing Rock. I mean, chemical weapons (tear gas), grenades, assault weapons, water cannons, and street tanks are being deployed against peaceful Americans in America. But the media’s coverage is apathetic. In fact, most outlets are downplaying the violence there.

Here’s a rundown of some of the mainstream news coverage put together by Fairness & Accuracy in Reporting (FAIR):

“The New York Times (11/21/16) gets a failing grade for its headline over a report on escalating police violence against Native American activists and others defending the Missouri River against the Dakota Access Pipeline:

“Sorry, New York Times – when more than 470 people have been arrested opposing the pipeline since August, that’s not the news. Nor did the print edition headline — ‘16 Arrested at North Dakota Pipeline Protest as Tensions Continue’ — add anything.

“No, the news in the story came in the second paragraph, where reporter Jonah Engel Bromwich wrote that ‘officials also defended their use of fire hoses against protesters the night before, despite the below-freezing weather.’

“Perhaps Times editors thought that wasn’t news, because police use of ‘water cannons’ against demonstrators was mentioned in an AP report that ran on the Times website the day before (11/20/16) under the anodyne headline ‘Police, Protesters Face Off at Dakota Access Pipeline.’ If that was the case, editors could have found more pressing information than the arrest count in the eighth paragraph of the latest story:

“Dallas Goldtooth, a spokesman for the Indigenous Environmental Network, said in a phone interview on Monday that the Oceti Sakowin medical team, which had been working in tandem with medics from the Standing Rock Sioux tribe, had reported that nearly 200 people were injured and 12 people were hospitalized for head injuries. One protester went into cardiac arrest and was revived by the medic team, he said.

“NPR’s website (11/21/16) likewise reported the story of police violence leading to widespread injuries under an innocuous headline: ‘Police, Protesters Clash Near Dakota Access Pipeline Route,’ as did ABC News (11/21/16) with its ‘Hundreds of Dakota Access Protesters Clash With Police.’ This ‘clash’ framing — also utilized in headlines on CBS (11/20/16) andCNN (11/20/16) — implies a parity between police in military vehicles, employing water cannon, tear gas, pepper spray, rubber-coated bullets and concussion grenades (one of which may have cost an activist her arm), on the one hand, and basically unarmed civilians on the other. (Police say one officer was hit in the head by a thrown rock.)

“The Washington Post (11/21/16) got the news into the headline, but framed it from a police perspective: ‘Police Defend Use of Water Cannons on Dakota Access Protesters in Freezing Weather.’”

“One almost gets the sense that editors writing headlines like these have enlisted themselves on the sheriff’s team, waving spectators away with a ‘nothing to see here, folks.’”

This article (Media Silence After DAPL Police Literally Blew Woman’s Arm up with Grenade) is free and open source. You have permission to republish this article under a Creative Commons license with attribution to Nick Bernabe andtheAntiMedia.org.