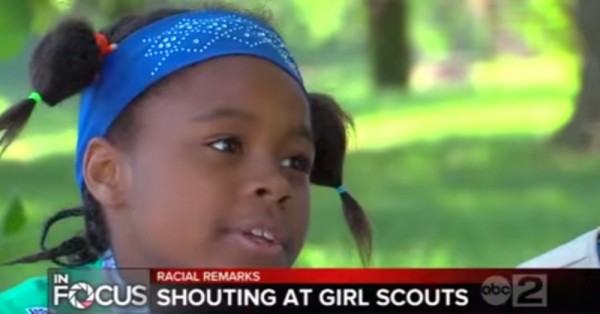 A group of African-American teenage girls from Cecil County, Maryland have said that they suffered racial insults from some adults when they spoke about the gross abuse of the rights of animals at a public meeting in the city.

The young girls were said to be members of the Girl Scouts of the Chesapeake Bay, Troop 176 and during the public meeting, they expressed their dissatisfaction about the treatment of animals who were housed at the county’s animal control facility. The racial comments were allegedly made by supporters of the county’s animal control vendor, A Buddy For Life (BFL). BFL is said to be getting paid $60,000/month by the county to manage its animal control facilities but local media, Cecil Times, reported that during a surprise visit to the facility they, “found unremoved feces, odors and many dogs with serious ‘mange’ and other skin conditions.” There were also allegations of, “over-staffing at the Buddy operation at the taxpayer’s expense.” The company is said to have been repeatedly fined for violating state and federal laws.

Some local media also alleged that despite the large monthly budget for BFL, the company spent just $877 over a three-month period on food for the animals.

It is against these violations of the animals’ rights that the girls spoke about that made them victims of unacceptable racial remarks and insults.

“I felt really bad for the animals because that wasn’t a really good home for them,” 10-year-old Amaya Spurlock told reporters.

“They were saying, go back to Baltimore where you belong and they started pointing out me and my sisters,” Arianna Spurlock, 13, said.

However, it is said that none of the girls live in Baltimore, which is more than an hour away from Cecil County. The girls also alleged that they were called “animals,” in addition to the racial remarks. Thinkprogress.org reported that the leader of the Scouts, Jayne Mitchell-Werbrich, admitted in an interview that the racial comments were made by BFL volunteers. BFL is said to have few paid employees. Mitchell-Werbrich said that she went with a group of parents to file a police report but were told it was not possible because the individuals, “did not use the n-word.” Mitchell-Werbrich explained further that the animals issue came to light in October of last year when she called the BFL facility about two dogs at a residence who appeared emaciated and mistreated. She said that despite her repeated calls, the company refused to address the situation. She said sometimes, someone at the facility would tell her that they have addressed the abuse of the dogs but it turned out not to be true. She then came to the conclusion that the company was untruthful and therefore shared her experience with the girls in her troop which prompted the girls’ interest in the issue. BFL officials later stated that the girls’ allegations should be ignored because they are blowing the matter out of proportion. The girls are now requesting a meeting with the Cecil County Executive, Tari Moore, to discuss the issue further. We will be following for updates. Stay with us and be expecting us!