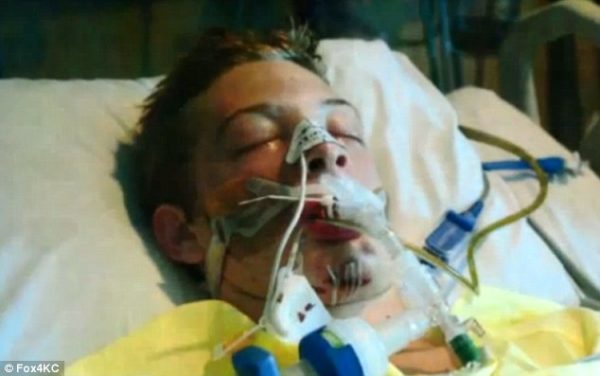 A newly released video by investigators in Kansas City in the state of Missouri, United States have discovered a reckless and brutal police officer tasing a teenager directly in the chest, uninterrupted for 23 seconds.

The incident is said to have happened in September 2014. According to the account of the story, Bryce Masters, then aged 17 was pulled over in his vehicle by officer Timothy Runnels. Officer Runnels suspected that the number plate of Bryce was linked to a stolen vehicle.

But in fact, Bryce’s vehicle had nothing in common with that stolen car Runnels was after. Runnels aggressively ordered Masters out his car, however, knowing very well that he has not committed any offence, Bryce questioned the officer why he wanted him out of his car. After a few exchanges, Runnels realized Bryce was not going to come out of his car. Runnels then opened the door and tries to drag Bryce out. Bryce, seeming to resist, still questions why he is being arrested. Eventually, officer Runnels seems to have had enough, he pulls out his taser, firing directly into the chest of the teenager for about 23 seconds, four times longer than a normal police taser is supposed to discharge for.

The power from the taser badly affected Bryce. He managed to slip out of the car, groaning in pain. Runnels then jumped on him, handcuffed him and dragged him like a loaded sack to the sidewalk, finally, slamming him hard on the ground. Part of the incident was recorded by the dashcam of Runnels patrol vehicle. An eyewitness, who also recorded part of the incident, said when Bryce was lying on the ground, Runnels still subjected him to severe beatings.

The witness also said it was only after Bryce was not showing any sign of response that Runnels called for backup, and also requested for medical help. At the hospital, medical officials confirmed Bryce suffered a cardiac arrest. It was revealed that his brain was deprived of oxygen for about six to eight minutes, sending him into a coma. In short, the Taser recklessly discharged by Runnels nearly killed Bryce.

Although Bryce survived, he only escaped narrowly. When he was discharged, the wounds he sustained from the beatings were healed. However, he was left with permanent brain injury.

Bryce told local media about his ordeal: “People tell me I’m different. I feel different.  I get in the car to go somewhere and then I’ll forget where I was going.  I’ve missed job interviews because I forgot them. I feel physically and mentally weak every day when I get out of bed.”

Bryce’s father and Kansas City police officer, Matt Masters, said his son was clinically dead and revived.  He narrated how he watched his son on a ventilator, being kept alive, and being told by doctors that his son would probably be a vegetable for the rest of his life. He also said he was shocked at the level of brutality his son suffered at the hands of a person who was supposed to be protecting him. When Runnels was put before the law, he pleaded guilty to one charge of depriving a minor of his constitutional rights. The court sentenced him to four years in prison. The court said Runnels was sentenced because he slammed Bryce on the face while in handcuffs. He was not sentenced for deploying the Taser.

Court filings revealed that Runnels allowed the taser current to run for 23 seconds, which is four times longer than officers are trained to have their tasers deployed.

After Runnels’ sentence, the family of Bryce said in a statement “While we are pleased that Mr. Runnels was held accountable for his actions, no one really wins in this scenario. Two law enforcement families were devastated by these events and we all simply wish that day had never happened.”

This article (Teen Left with Permanent Brain Damage after Cop Tasers Him in Chest for 23 Seconds [Video]) is a free and open source. You have permission to republish this article under a Creative Commons license with attribution to the author and AnonHQ.com.