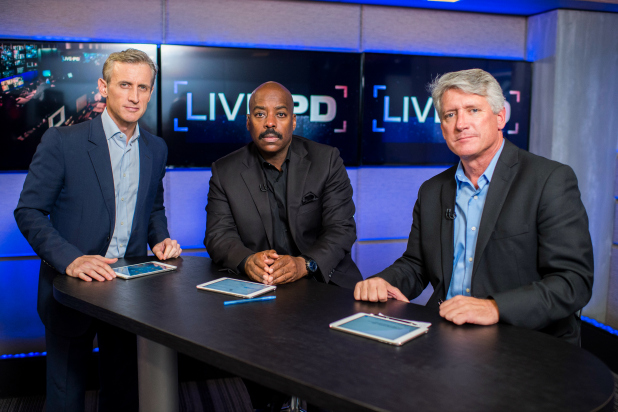 The new show highlighting the brave men and women of law enforcement, which debuted on A&E, was just given the boot by the Mayor of Tulsa. The Cops knock-off ‘Live PD’ follows the police around while on patrol and promises to give the audience an unbiased look at what it’s like to be a cop. Unfortunately, all the show did was prove that patterns of discrimination and racial profiling are alive and well in Tulsa. According to the Mayor’s office, they felt that the cameras were a distraction to the officers “attempting to keep our streets safe.” But that isn’t the whole truth. The reality is that the citizens of Tulsa responded fiercely on social media, proclaiming that due to the filming of the show, they were afraid to leave their homes. According to reports, the show’s filming was restricted to one singled-out neighborhood. The neighborhood in question, if you couldn’t guess, was a primarily black neighborhood.

One social media post called out the mayor directly: “GT Bynum, look at the comments here, please. Every week people post about how they can’t leave their homes for fear of being caught on this show. Please get A&E out of Tulsa.” The Mayor responded, “I spoke with Chief Jordan about this last week and he confirmed our agreement with them has been terminated. I am not a fan.” Unfortunately, his statements to the media didn’t address the racial aspect of the show. “I’m not worried about public relations. I’m worried about the safety of our officers and our citizens.”

One video that made its way to the airwaves demonstrated inexplicably how racist the department is. In the clip, it shows a Tulsa police officer pull up to a black man wearing a blue polo shirt. Without even getting out of his patrol car, he harasses the man about why he is looking in his own trunk. He then tells the man he believes the man to be in a gang because of the color of his shirt. The man promptly gives him a piece of his mind and fortunately doesn’t end up in handcuffs. The indiscriminate harassment of the members of a single neighborhood were too much for the city to bear. If the police were caught on video racially profiling enough times to catch the attention of the mayor, just how many times do they practice racial discrimination when they’re off-camera? The Tulsa PD has had more than its share of controversial incidents. Most notably, the shooting of Terrance Crutcher by Officer Betty Shelby. Betty Shelby murdered Crutcher without provocation but is still on the Tulsa Police payroll. Tulsa has a total of around 775 cops, yet on average, around 140 are investigated internally by the department for misconduct. That’s nearly 20% of the entire department being subject to investigation for offenses like excessive force. This is an unacceptable number by any standard. Perhaps the mayor should be more concerned with cleaning up the police department rather than with the image the show projects for the city.

This article (Tulsa Mayor Drops Live PD TV Show After Blatant Racial Profiling Captured on Video) is a free and open source. You have permission to republish this article under a Creative Commons license with attribution to the author and AnonHQ.com.