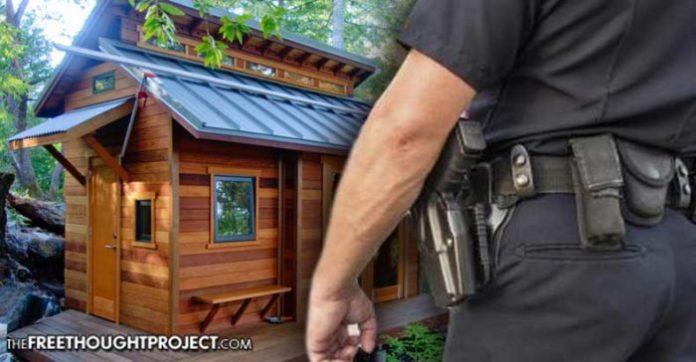 Recently, we published a story telling how a man from the state of Minnesota, United States was sentenced to 6 months in jail simply because he was harvesting wind energy on his property.

The man, Jay Nygard, was put behind bars in October 2015. Mr Nygard is a known clean energy advocate, founding Go Green Energy. His company makes solar panels, hot water systems and attic fans, as well as turbines that mount onto roofs or stand freely, like the one he built that resulted in his prison sentence. City officials of the city of Orono, where Nygard lives, claimed his wind turbine violated so-called zoning laws, and that it made neighbors uncomfortable. This resulted in a prison sentence for Nygard.

But as we become aware of the Nygard story, more details are emerging from towns and cities in the United States, where officials are using draconian laws to clamp down on innocent citizens who want to live a comfortable and cheap lifestyle.

We all know how the cost of living is skyrocketing around the world. Particularly in some towns and cities of the United States, the rich are displacing the poor, allowing gentrification to take over in such areas.

In order to survive, the poor and all those who want to live a moderate life in these areas and elsewhere in the country, have resorted to cutting down their expenditure on housing. People are increasingly turning to tiny homes, which of course save money as compared to traditional homes.  These dwellings, typically defined as less than 500 square feet, are a way for people to break free of mortgages, taxes, utility bills and the general trappings of “stuff.” They’re especially attractive to millennials and retirees, or those seeking to live off-grid.

A big priority for tiny home dwellers is their reduced environmental impact. Many are capable of producing all their own energy from solar and wind, collecting rainwater and reusing graywater. This reduces the cost of living for people who live in these tiny homes. In Alaska’s city of Wasilla, a similar thing has happened. The tiny house movement has starting to emerge in the state. However, city officials are now passing laws to ban further construction of these cost-effective houses.

In the city of Boise in Idaho, officials do not allow homes of less than a few hundred square feet. Officials fallaciously claimed allowing tiny homes will lead to decay and unsightly little cabins plunked down beside traditional homes. Los Angeles’ city officials have openly called tiny homes for the homeless “a threat in many ways to our public safety.”  This has rendered many poor people in the city homeless.

23-year-old college graduate, Sarah Hastings, built a 190-square-foot home on three acres of farmland in the city of Hadley, Massachusetts. She even set a small garden next to it. The tiny house looked very beautiful. But town officials claimed she was not in compliance with zoning ordinances, and therefore forced her to abandon her beautiful and cost-effective home.

Hastings proposed a change to the town’s laws to allow for her tiny home, but the measure was voted down by town officials. In fact, as of now, few towns and cities in the United States allow for the stand-alone tiny houses. Most communities have minimum square footage requirements for single-family homes, mandating that smaller dwellings be an “accessory” to a larger, traditional house. Many also have rules requiring that dwellings be hooked up to utilities, which is a problem for tiny-house enthusiasts who want to live off the grid by using alternative energy sources, such as solar panels and rainwater catchment systems.

“When cities require the same permitting for tiny houses on foundations as they do for traditional houses, it often doesn’t make financial sense to build tiny. “At that point it’s really more of a lifestyle choice than an economic choice,” said Nick Krautter, a real estate agent in Portland, Oregon who abandoned plans for a tiny house development.

This article (U.S. Towns and Cities Increasingly Cracking Down on Tiny Dwelling Homes) is a free and open source. You have permission to republish this article under a Creative Commons license with attribution to the author and AnonHQ.com.