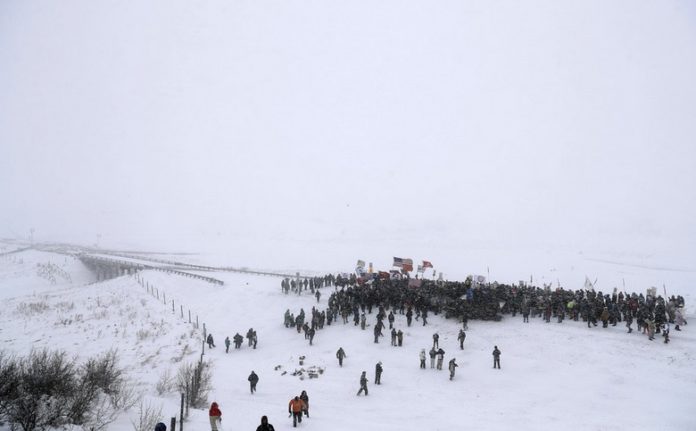 On November 20, approximately 400 unarmed anti-DAPL activists or water protectors protesting against the Dakota Access Pipeline in below-freezing temperatures were hit with teargas, water cannons, rubber bullets and percussion grenades during a standoff with highly militarized law enforcement officials at the Backwater Bridge over the Missouri River on Highway 1806 in Morton County, North Dakota.

Although the Morton County Sheriff’s Department described the violent standoff as an “ongoing riot” and the unarmed water protectors as “very aggressive,” nearly 200 activists were left injured due to the excessive force used by law enforcement officials to deter the movement. Make no mistake, none of the law enforcers suffered any kind of injury from any of the “very aggressive rioters.” The standoff was the latest in a string of protests that have taken place against the $3.8 billion Dakota Access Pipeline (meant to carry crude oil from the Bakken oil fields through the Dakotas and Iowa to Illinois) since spring 2016. While Energy Transfer Partners – the owners of DAPL – assert the pipeline would help the U.S. attain energy independence, the Standing Rock Sioux tribe, Native Americans, and environmental and human rights activists claim DAPL could pollute the Standing Rock Indian Reservation and destroy the tribe’s sacred sites.

The oil pipeline is being rerouted! Don’t ever let them tell you your voice/protest doesn’t matter #NoDAPL #DAPL pic.twitter.com/BcccwCVcE0

DAPL is approximately 85% constructed. But on December 4, the Army Corps of Engineers denied an easement for the Dakota Access pipeline to cross under Lake Oahe in North Dakota — the location of the remaining 15% to be completed. Energy Transfer Partners, however, stated just hours later, that they will ignore the Army Corps’ orders and drill anyway.

Unmoved by the Army Corps’ order, Energy Transfer Partners went ahead as promised and started drilling in blizzard conditions in no time; following which, over 2,000 US veterans reached the Oceti Sakowin protest camp to act as an unarmed militia and peaceful human shield to protect the anti-DAPL activists in the event of police brutality. Mark Sanderson, a former Army Sergeant who served in Iraq, told Vice News:

“Our goal is to stand there and if need be take the rounds for the First Nations people so they can do their thing. We’re here to assist in any way possible. The police are trying to say it’s not a peaceful protest because we’re in body armor. But I mean, this doesn’t look aggressive at all. There are no magazine pouches, there’s nothing that can be construed as having a weapon. We’re just padding ourselves against any force they might use.”

Thank you to all the Veterans for coming out and standing up for the water protectors. Vets played a major role in stopping #DAPL. #NoDAPL

On December 5, in a heartening display of unity and solidarity, the veterans marched to the 1806 bridge — a strategic point that controls access between the encampments and the construction area — together with hundreds of water protectors in attempts to reoccupy the bridge held by the police since the November 20 standoff.

Please share this story to let the American public know that the fight against DAPL is not over!

If you’d like to donate to the veterans at Standing Rock, you may do so here.

This article (Standing Rock: U.S. Veterans, Water Protectors March to Reoccupy the 1806 Bridge [VIDEO]) is a free and open source. You have permission to republish this article under a Creative Commons license with attribution to the author and AnonHQ.com.