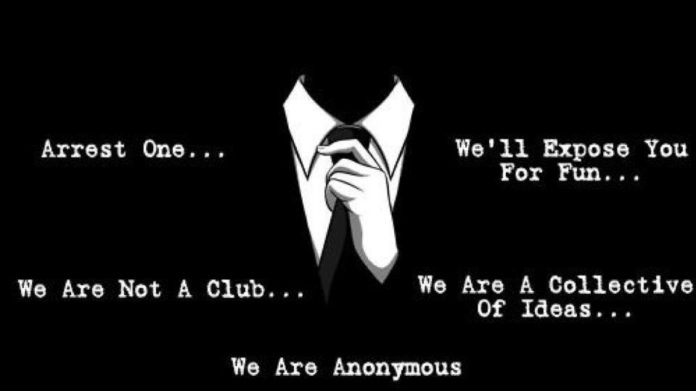 There’s a current headline making the rounds of Mainstream Media’s Bloomberg, Yahoo, Business Standard, and other outlets, that you can see here, suggesting Anonymous hackers have combined their talents with the Hacker Army responsible for some of the biggest cyber bank heists last year. Although we can’t at the moment substantiate this claim, here’s what we do know:

The initial claim that Anonymous has decided to target large international banks comes from an unknown source who has “asked not to be identified.” Ambiguity smothers the only two paragraphs mentioned relating to Anonymous in the initial Bloomberg article that started the ball rolling in this headline. See for yourself:

“The hacking collective “Anonymous,” known for its activism against big corporations, security forces, and governments, is specifically targeting central banks, according to two people with direct knowledge of the group’s activities, who asked not to be identified.”

Rarely do members of the Anonymous Collective whistle blow on their fellow members when such large stakes are at risk (yes, Sabu does spring to mind). Who has this knowledge? There is no central leader and only those within the click of the particular hacking division of Anonymous (one of thousands) responsible for this particular heist would have this knowledge. “While the people wouldn’t say which banks are being targeted, they said the group has been busy recruiting new hackers to aid it in its forays, and renewed its attack against a number of central banks in February.”

So…the Anonymous whistleblower(s) won’t reveal the targeted banks, along with…well anything. We know a bank will be targeted. That’s it. By someone. This could be any cyber-attack by any number of people not related to Anonymous. Did the writer conjure the story out of thin air?

“The group last year attacked at least eight monetary authorities” for which links to bank statistics on performance are posted rather than supporting information. “The group” referred to is actually the alleged arrested cyber attackers that hacked the Bank of Russia Dec. 2016, not so long ago.

The Russian government did announce its discovery of a “plot by foreign spies to disrupt Russia’s banking system using a spate of systematic “denial of service” attacks that targeted a range of the country’s banking operations.” Hmmm. Furthermore, the article then uses carefully constructed wording to tie in Anonymous with the cyber attackers – again with no evidence to back up the claim other than a professor generalizing facts:

“The actions by non-state hacking and hacktivist groups such as Anonymous “are a wake-up call that should alert us to the critical weaknesses of global financial systems,” said Stefano Zanero, a professor of computer security at Italian university Politecnico di Milano.”

The headline has been regurgitated on many sites since the initial post, and reading the rest of the article, Anonymous is not mentioned once. However you do have emotive phrases such as “Cyber attacks have become military attacks,” and “cyber-security attack on the U.S. banking system is ‘one of the most significant risks our country faces,’” says Federal Reserve Chair Janet Yellen.

This isn’t to say Anonymous aren’t behind some attacks – but this headline is unsubstantiated. This is a case of a smoking gun before the bullet has fired. Trump is known for his dislike of Anonymous, as most political players are. An accusation like this not only goes against the hackers of the Anonymous Collective, it goes against every member who proudly works to better this world under the Anonymous banner.

When the next cyber-attack occurs, whether Anonymous is involved or not, this headline grabber frames the Collective nicely as the suspect for an international crackdown.

We’ll continue to monitor the situation. In the meantime, beware of what you read.

This article (Unsubstantiated MSM Headline: “Anonymous Did It” Makes the Rounds to Frame Collective) is a free and open source. You have permission to republish this article under a Creative Commons license with attribution to the author AnonWatcher and AnonHQ.com.