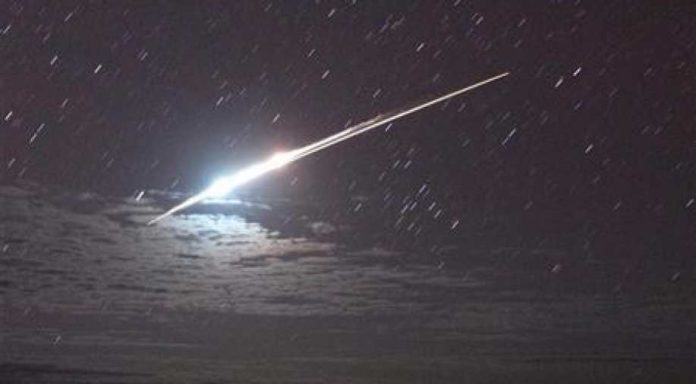 A strange footage that looks distinctly different from CGI was captured on the same day that mainstream media reported pilots saw what appears to be the same thing in the sky, in the Republic of Ireland.

The dash camera footage was published by Sandy Laverty of Coleraine, and it went viral on forums before being reported on by the mainstream UK media.

Two odd, luminescent objects were captured flying across the scene of the sky, and the pilots who some consider to be a very credible source of information, confirmed that they had actually saw the same thing, strongly suggesting that the video in question in fact was not CGI.

At 6:47, the first sighting was recorded by a pilot employed by British Airways, flying a Boeing 747 jet from Montreal, Canada to Heathrow over Kerry.

The witness described observing some object coming up on the left-hand face of her plane, before the object “rapidly veered to the north.” However, that dashcam footage shows the potential UFO at the time of 6:44 am, just a few minutes before.

So we are left with a few distinct possibilities if the evidence in question is considered legit. One, the two objects sighted, despite being so similar, were different and the sightings were a coincidence. Or, the more fantastic possibility is obviously that the objects were UFO’s, and they traveled hundreds of miles in a matter of mere minutes.

In the dashcam footage, you can see two glowing objects way off in the distance, and it seems like they come into view very quickly before also disappearing suddenly.

It’s unfortunate that there is no available footage of the pilots’ initial sightings, but we have one piece of information: audio that has emerged of the pilot speaking to Air Traffic Control.

Authorities have actually got involved as well. An investigation into this incident which could involve a UFO was launched by the Irish Aviation Authority, after someone posed the question if any military exercises were taking place, asking the Shannon Airport Air Traffic Control unit.

The response was described as terrifying, and the air traffic controllers said “There is nothing showing on either primary or seondary [radar].”

So the thing didn’t even show up on radar as it should? Could it have been that fast? The concerned pilot managed to make the response “Okay, it was moving so fast,” before continuing that she was wondering what it could possibly be.

At a “very high speed,” a bright light blasted past the aircraft in the direction of north, according to the pilot. After the report she issued, yet another pilot employed by Virgin Airlines confirmed that they had also witnessed “multiple objects” which they observed were “very bright.”

Now that’s what, 3 pilots who have all confirmed they saw the same unexplainable thing? The Virgin Airlines pilot thought it could possibly be a meteor, with “multiple objects following the same sort of trajectory,” they said.

Yet another pilot admitted they were absolutely shocked at the speed of the unidentifiable object they witnessed, noting that the acceleration of it was “astronomical, it was like Mach 2.” How could an asteroid “accelerate?”