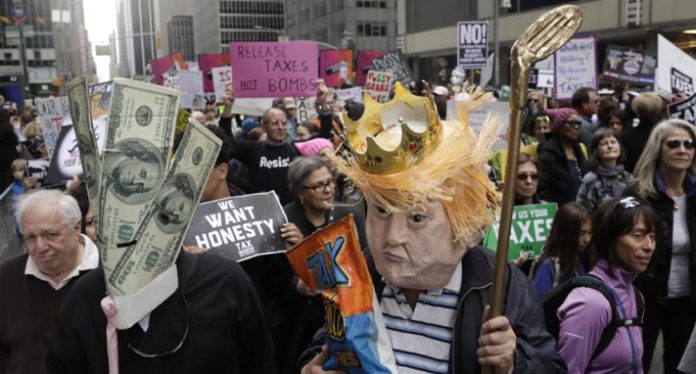 Protesters took to the streets in midtown Manhattan and dozens of U.S. cities on April 15, coinciding with the traditional deadline for U.S. federal tax returns (this year the filing date has been pushed backed two days, to April 18). Protesters marched, calling on President Donald Trump to release his tax returns, saying Americans deserve to know his tax history, his business ties with foreign powers, and conflicts of interest, if any exist. Trump is the first major-party presidential nominee in more than 40 years to refuse releasing his tax returns, saying that he is under IRS audit – however, there is no law prohibiting him from releasing his own returns in these circumstances. Trump also stated that American voters don’t care; he declared a $916 million loss in 1995, which was, The New York Times reported, “a tax deduction so substantial it could have allowed him to legally avoid paying any federal income taxes for up to 18 years.”

“Thanks to Trump, I think that releasing your taxes when you run for president now has to be a law,” 51-year-old New Yorker Marni Halasa, who arrived in a tutu and leggings made of fake dollar bills and holding a sign that read “Show Me The Money!”, told Reuters.

The nationwide protests, dubbed the Tax March for economic justice, stemmed from the Women’s March that took place a day after Trump’s inauguration. The Tax March, among the largest protests since the Women’s March, unfolded a day after the White House announced that it would end the practice of releasing White House visitor logs, an attempt by Trump (who had promised to ‘drain the swamp’ in Washington) to shield his activities from scrutiny.

Trump claims no one cares about his taxes. The next mass protest should be on Tax Day to prove him wrong.

The tax returns of presidents and vice presidents are automatically audited every year, and it is totally legal to publish their tax returns. Although there is no legal obligation, U.S. presidents and presidential candidates have released their returns voluntarily for decades.

But Trump – who has repeatedly admitted using legal loopholes to minimize his tax burden – has justified his refusal to publish tax returns by noting they are being audited; however, federal tax authorities say that does not bar him from releasing the documents.

67-year-old Ellen Lodwick, a retired corporate researcher from Maryland, cast doubt on Trump’s businesses: “There are probably many illegal or questionable investments in things that could affect how he looks at government and legislation, because he’s too connected.”

“Why does he want to hide his taxes? That’s what I want to know. He promised transparency; remember ‘Drain the swamp?” 53-year-old Martha Marquez, a graduate school professor who attended the Palm Beach march holding a sign that read “Show Me Yours and I’ll Show You Mine,” told The New York Times. In Los Angeles, television director Mike Stutz turned up at the march holding a sign that read: “What Tax Returns? Putin paid cash. Trust your oligarchs,” referring to allegations of contacts between Trump’s campaign and Russia, led by President Vladimir Putin.

#TaxMarch crowd in NYC stretches for blocks as protesters make their way to Trump Tower pic.twitter.com/nAPFAWxgYb

Release your taxes.
What are you hiding?

This article (VIDEOS: Tens of Thousands March Across U.S. Demanding Donald Trump Release His Tax Returns) is a free and open source. You have permission to republish this article under a Creative Commons license with attribution to the author and AnonHQ.com.