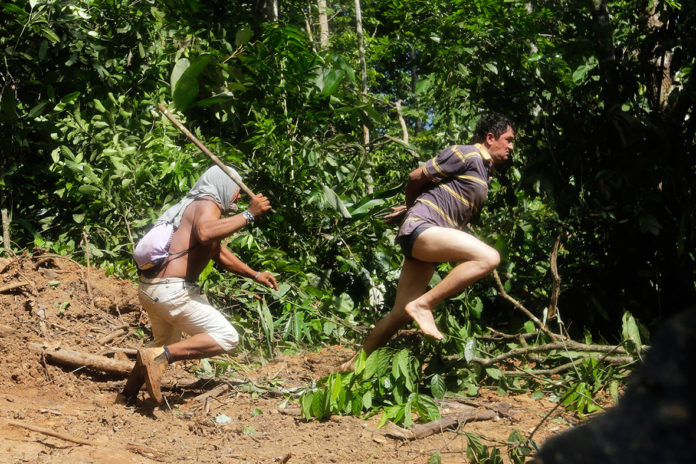 Ka’apor Indian warriors tied-up, stripped and beat illegal loggers with sticks during a jungle expedition to search for and expel the loggers from the Alto Turiacu Indian territory, near the Centro do Guilherme municipality in the northeast of Maranhao state in the Amazon basin, Brazil. Ka’apor, along with four other tribes, are the legal inhabitants and caretakers of the territory. They were defending their neck of the woods from loggers, who are stealing precious timber from a supposedly “protected” part of world’s largest rain forest. The dragons are roused, the government is still sleeping.

In 2013, annual destruction of Brazil’s Amazon rain forest jumped by 28 percent after four straight years of decline. Based on satellite images, it is estimated that 5,843 square kilometres of rain forest were cut down in a one-year period ending in July of 2013. Rain forest clearing is responsible for about 75 percent of Brazil’s emissions, as vegetation is burned and fallen trees rot. This means an estimated 400 million tons of carbon dioxide is released  into the atmosphere every year, making Brazil the sixth-largest emitter of carbon dioxide gas.