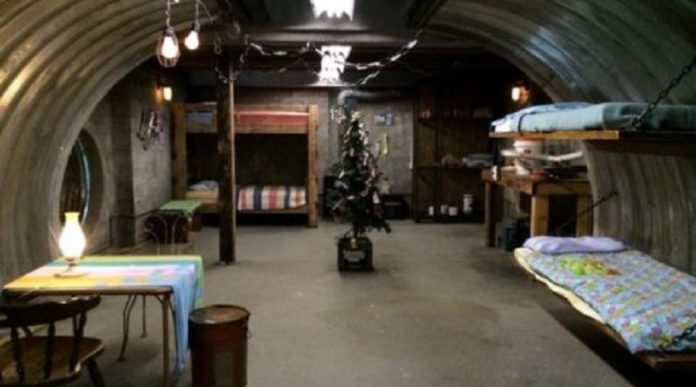 Washington D.C. government officials are flocking to doomsday camps around the country. Which of course begs the question: what do they know that we do not?

According to the Washington Examiner, a building network of backwoods doomsday camps around the country are pulling in members from affluent areas and even Washington national security officials as the threats grow from nuclear war, an EMP (electromagnetic pulse), or virus attack. Dubbed Fortitude Ranch, the outposts promise protection and a year’s supply of food for those unable to build their own bunker with preparations for a SHTF scenario. What’s more, until a crisis strikes, the doomsday camps are being used for prepper training and vacations.

One of Fortitude Ranch’s members from the Baltimore area said that he and others joined after “waking up” to the potential of a national crisis from an attack, financial meltdown, or political violence. “For most of us, something rattled our cages and woke us up,” he said.

He called an attack or even a weather-related electromagnetic pulse shutdown of the electric grid “inevitable,” and a driving force in his project.

One of his members from the Baltimore area, speaking on background, said that he and others joined after “waking up” to the potential of a national crisis from an attack, financial meltdown or political violence. “For most of us, something rattled our cages and woke us up,” he said.

Through memberships and his own cryptocurrency called “Fortitudes,” Miller has raised about $400,000 and established a ranch in West Virginia and Colorado with 10 others planned. An open house at the West Virginia ranch is scheduled for April 21-23.

He said that for the West Virginia ranch, “most members are professional Washington area folks. They don’t have time to do this own their own.” The cost is about $1,000 per person per year to join.

Each camp is expected to house 50-500 in a crisis and Miller said they will have lodges, underground bunkers and guard towers. In the event of a social meltdown, members will be responsible for manning those towers. Each camp has a shooting range.

He said that the camps are nearly as survivable in an attack as the Mt. Weather FEMA site near Virginia’s Shenandoah River where several Washington leaders were housed after the 9/11 attacks.

There have been numerous reports recently warning of EMP, nuclear and viral attacks from Russia, Iran and North Korea.

“You’d have to be an idiot not to think it will happen,” said Miller, author of “Rohan Nation: Reinventing America After the 2020 Collapse.”

On his website, Miller plays up the prepper/vacation angle for members. “We are a large survival community that can keep members spread out (virus protection) have sufficient size to deter/defeat marauder attacks and raise crops/livestock.” it says.

“The best approach to reliable, effective, affordable survivability is to join a survival community that is large and well prepared to deal with viral pandemics, marauder threats, and long-term collapse conditions. We are also a great, low cost vacation and recreational site for our members since we locate in remote, beautiful forest, mountain areas,” it adds.

The Apocalypse is Near: Silicon Valley Super-Rich Get Ready for Nuclear War