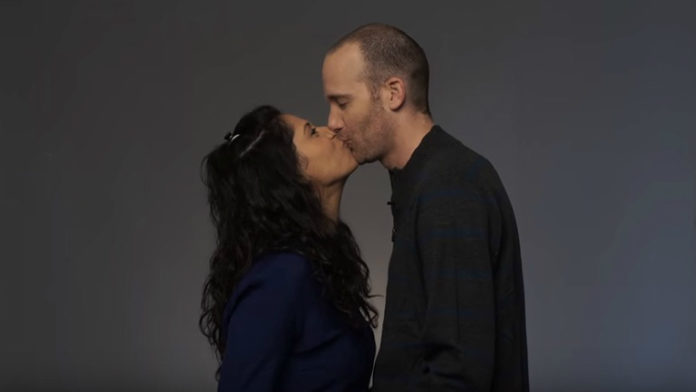 Touching video sends the message: ‘Jews and Arabs refuse to be enemies’, written in English, Hebrew and Arabic.

When a book about a love affair between a Palestinian man and an Israeli woman was banned, Jews and Muslims kissed on camera in protest.

‘Borderlife’ is a fictional romance novel set in New York, written by bestselling Israeli author Dorit Rabinyan.  It was banned from schools by the Israeli Education Dept last month. The reason given was that parents might view it as a ‘threat to distinct identity’, which sparked anger among many Israelis.

Time Out Tel Aviv asked six Jewish-Arab pairs to meet up and kiss on camera in protest at the censorship of Rabinyan’s book. Some couples were gay, some were straight, some were friends, some were lovers- and some had never met before.

“I’m sure it will give a bit of hope to those watching it, no matter whether they are Israeli or Palestinian, Jews or Muslims, who live in this country.”

The video points out that Arab–Jewish marriages are rare, and education systems for the two religions are still separate in Israel.

After going viral on social media a few days ago, this video suddenly disappeared from Facebook. The Social Media giant denied adding to the censorship and claimed it was not responsible for removing the protest video.

Time Out Tel Aviv said of the video’s take-down:

“We will continue to believe that people are first human beings, before the religion or nationality that was either chosen by them or their ancestors.”

This article ([Watch] Love Between Jews And Arabs Used As Protest Against Israeli Book Ban) is free and open source. You have permission to republish this article under a Creative Commons license with attribution to the author and TrueActivist.com