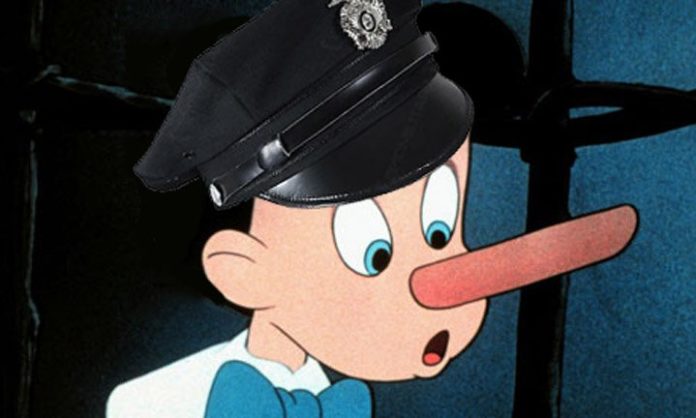 Unless you’ve been living under a rock for the last century, you should know that cops lie. They are taught to lie. They are taught to spin every situation into a life and death struggle. An old man with a cane is now an armed subject, and the like. Cops go through extensive training on how to handle suspects, and by suspects, I mean everyone that isn’t a cop. They are coached on how to wiggle their way out of constitutionally questionable situations. While we occasionally catch officers outright fabricating circumstances to justify misconduct, the true nature of the lie in police work goes mostly unnoticed.

Police are taught to articulate everything. As a former officer, I was told on numerous occasions that I could do anything I wanted to if I could articulate why I did it. From experience, justice as a concept is only a small part of why cops do what they do. Their main function is to maintain the police narrative that cops are good, and that everyone they deem undesirable is bad. The Us vs. Them mentality is more like Us vs. The World. To show that you are a productive cop, the brass wants numbers to justify your employment.

Even though arrest and citation quotas are illegal, no officer wants to be the guy with the lowest numbers. This unspoken demand pits officers against the public; to fulfill the “needs of the clan,” to put it bluntly. This should cause a fundamental moral dilemma in every cop, but instead, they choose the route of the police apologist and toe the blue line. Police are paid to put their conscience on hold and perform actions they would otherwise deem reprehensible.

When we watch police-shooting videos that are unquestionably murder, you should note the police reports written by officers involved seem to never describe what we, as rational human beings see. When we see a cop shoot someone showing no resistance or who is obviously unarmed, know that the police are going into overdrive, seeking out justifications in hindsight that could allow the shooting in the first place. Where is the truth and justice in that? Officers involved in shootings are often allowed to view body cam or other video footage and are coached by supervisors. Allowing an officer to see footage of the incident before making statements about it, could effectively be considered witness tampering. If a cop shoots someone and it’s only later determined that the suspect was armed, you can bet your life the cop will say “I thought he had a weapon” based on his viewing of after-the-fact footage. This is corruption at its very core.

As there isn’t now, nor will there ever be a technical term for the lies cops tell daily in their police reports, I have dubbed it creative articulation. A great example of this can be found right off the bat in the Darren Wilson shooting of Mike Brown. I could break down half a dozen reasons why Mike Brown’s death was an unjustified murder, however, the point here is the basic premise of Wilson’s account has ‘creative articulation’ written all over it. The most glaring example is the statement by Wilson that Brown was charging at him to justify the shoot. An unarmed man who has already been shot at while running away, taking slow steps in your direction, does not define “charging;” nor is it legal under the police “21-foot rule” which deals with hostile subjects who are not an immediate threat. Wilson used creative articulation to spin the story from start to finish, so unfortunately, we’ll never know what happened. Other than he lied, that is.

But did Officer Wilson actually lie? By your standards and mine, he absolutely lied. Unfortunately, police don’t hold themselves to the same standard, and have over time allowed themselves to be blind to what the truth really is. The only truth that matters to a cop is the one he can spin in his own favor. If you kill someone, you have to be able to articulate it at all costs, no matter how ridiculous your version of events could be. Creative articulation is the one thing that allows cops to murder people and not face any repercussions.

This applies to police shootings as no one can ever, with 100% certainty, say what is going on in a cop’s head when he pulls the trigger. Therefore, no one can ever say absolutely that they are lying. The cop might have honestly believed for a split second that the bright yellow banana you had in your hands was a gun before he executed you. Oops. The reality is, however, that the level of obfuscation taught to officers who are newly hired, fundamentally conditions them to not only spin everything in their favor, but to genuinely believe the spin they themselves created. So, is it truly a lie if the officer believes his own bullshit?

You can’t expect police to tell the truth. Not anymore. The veil has lifted and the public now see behind the curtain, thanks to viral videos and social media. While it starts with police, it is the state investigators and district attorneys who know the laws, and then blatantly go out of their way to cover-up misconduct that should be held accountable. Unfortunately, we have seen over the last three years or so, that no matter how damning a video is showing police misconduct, the DAs and investigators prefer to protect their own professions and the people they work with than to serve the public good. In cases where the public forces an arrest of an officer, the DA seems to show leniency or intentionally sabotages their own case by over or under charging the crime. When was the last time you saw a high-profile police conviction?

The cold harsh reality is that everything about the current system of policing in America is broken. Another reality is that if police focused on the areas that mattered, of which there are only two – violent crime and economic crime – they truly wouldn’t have much to do in a day. This is the slippery slope that leads us into civil exploitation through traffic fines, the drug war and out of control pro-active policing, simply so police can justify their own existence.

Just as police turn innocent Americans into criminals, they have bastardized the very meaning of the truth.

This article (When Lying Exonerates Cops, They Have No Incentive to Tell the Truth) is a free and open source. You have permission to republish this article under a Creative Commons license with attribution to the author and AnonHQ.com.