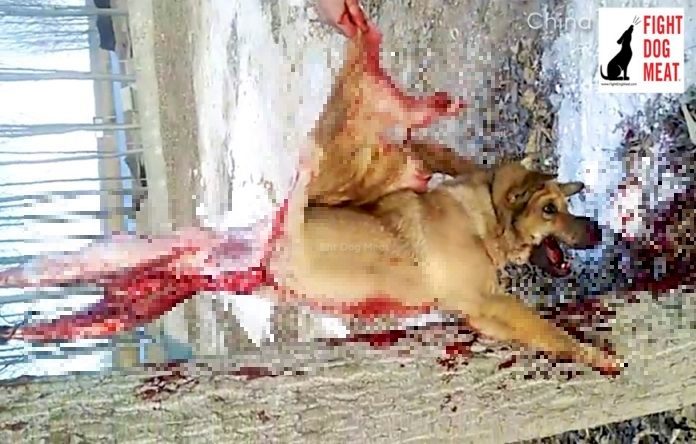 Animal cruelty, it seems, has become the accepted norm in China. More than 10,000 cats and dogs are attacked, tortured, and skinned/ burned alive during the 10-day-long annual Yulin Dog Meat Festival. The dogs, which survive the painful ordeal, are beaten to death, have their throats slit open, or cooked while still alive.

Even though animal rights activists claimed to have saved more than 1,000 dogs due to be slaughtered and eaten during the festival last year, the cruel mindset didn’t change. A horrific video showing a group of inhuman beings throwing a greyhound dog into a barrel of boiling water and cooking it alive emerged out of China a few months later.

Now, another horrific tale of dog slaughter is being reported from China. The petition, calling the Chinese government to put a stop to the vicious dog meat trade, describes the horror in detail:

“…The dog is still alive, he howls in despair, begging to be rescued, but there is no one there for him. A man’s hand can be spotted tearing up his fur. In just a matter of minutes, the dog dies, leaving this planet in the most inhumane way.”

Click here for the graphic video, which shows the dog is still alive as it whimpers and writhes in agony being skinned alive. “The video of the dog being skinned alive is difficult to watch, but it has to be shown to tell this poor dog’s story, and what he was forced to endure as a dog meat dog in China. Please know that Chinese animal activists are just as horrified at videos like this, as you and I. It brings pain to their heart to know people such as this dog butcher walk free while answering to no-one, and will repeat the same heinous acts again and again.” This article (Graphic Video: Dog Tied to a Tree Howls in Pain as the Helpless Canine is Skinned Alive) is a free and open source. You have permission to republish this article under a Creative Commons license with attribution to the author and AnonHQ.com.