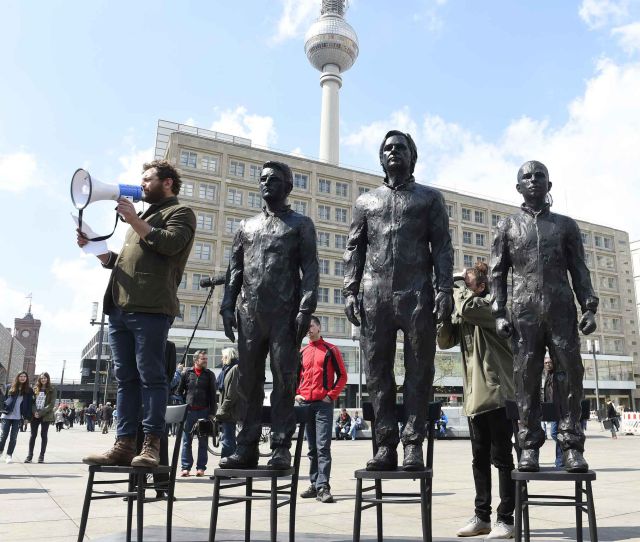 The three heroes stand on chairs with a fourth chair placed next to them to encourage supporters to take a stand for freedom of speech and information.

Life-size Bronze statues of Julian Assange, Edward Snowden, and Chelsea Manning were unveiled in Berlin’s Alexanderplatz Square, as an ode to the courage of these whistleblowers, in front of German politicians, members of German Green Party and activists.

During the unveiling, the artist behind the work, Italian sculptor Davide Dormino, clarified that he wanted to “represent three contemporary heroes who have lost their freedom for the truth” yet act as a reminder of “how important it is to know the truth and have the courage to know the truth”.

“The statue pays homage to three who said no to war, to the lies that lead to war and to the intrusion into private life that helps to perpetuate war. The fourth chair is open to anyone here in Berlin who wants to get up and say anything they want. People are saying many different things. From politics to babbling to silence, from people who desperately want to help Julian, Bradley and Edward to people who have no idea who they are. This chair is, I guess, a place of free speech,” said Dormino.

A number of people took the opportunity to stand on the chair and speak to show that they were not afraid to take a stand and speak truth similarly to these three whistleblowers.

A ‘fourth chair’ for freedom at #Berlin‘s #Alexanderplatz http://t.co/KKrtLandhF pic.twitter.com/TWtOksCQAR

#Whistleblower Statue: take a stand and speak up next to #Manning, #Assange, #Snowden @ Alexanderplatz, Berlin pic.twitter.com/ivB1Of74aj

#Whistleblower Statue in Berlin: People are now standing up and have something to say pic.twitter.com/3jSAPmksJ7

Whistleblowers’ statue in Berlin’s Alexanderplatz. “The vacant chair is for *you*!” RT @areasteve pic.twitter.com/iJfOvQGMlf