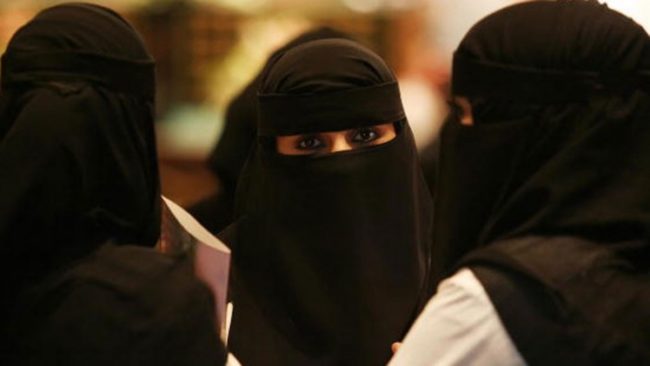 There is an uprising of women in Saudi Arabia taking to social media and demanding equal rights for the first time in this country. In response, Saudi Arabia’s grand mufti has called these women’s efforts “a crime against Islam” and said it threatens to undermine Saudi society. “This is an evil call that goes against the Sharia and the instructions of the prophet,” he added.

About the situation unfolding in the country right now, Middle East Eye explains “The grand mufti of Saudi Arabia recently made an official statement saying that Saudi Arabia would never abolish the guardianship system, which legally grants men the ability to control parts of a woman’s life. Some Saudi women, opposing his views, wrote an open letter to the king, petitioning against the guardianship system, and asking that women be treated as adults, not legal minors. That debate has gone viral on Arabic Twitter.”

To understand the guardian system, people pass it off as treating adult women like minors under 18 – the way they are treated in Western society, but it does go much further than this.

As reported by The Week, here are 6 things women are not allowed to do in Saudi Arabia in this current day:

2.) Show skin or wear make-up that “show off their beauty” (police will confront them)

3.) Have a conversation with a man who is not a relative in public (there are even separate entrances to businesses segregated by sex)

5.) Play sports – At the Olympics women had to be escorted by men and cover their hair; clerics back home were quoted calling them “prostitutes” for competing.

6.) Try on clothes in changing rooms when shopping

As recently as last week, there was an online petition. It collected over 14,000 signatures to end male guardianship laws in the country, but sometime in the last week, the petition was taken offline – likely under the pressure of the Saudi government.

So, in response, women started taking to Twitter and the results have been impressive, and like the Arab Spring of 2011, Saudi women hope to ride social media into social change. Saudi Arabia is responsible for 40% of the Arab world’s Twitter traffic. The Arabic versions of these hashtags, #StopEnslavingSaudiWomen, #IAmMyOwnGuardian and #TogetherToEndMaleGuardianship have all since gone viral.

In response to the rise on Twitter, the Saudi government has begun closing down the accounts of people posting these hashtags – including SAFE and Cohen, two of the biggest accounts attributed with starting the movement.

So, standing against the oppression of women in Saudi Arabia and in support of their fight for freedom in this modern world, I call on all people who believe in women’s rights and equality to share this story and these hashtags on your social media  – maybe tag someone in Saudi Arabia while you’re at it. :lulz:

In other related news, within the last week, women in Iran are similarly taking to social media in protest – sharing videos of themselves riding bikes in public. This is ‘scandalous’ for these women, because Iran’s top law maker recently made it illegal for women to ride bicycles in public – saying that bicycles “violate a women’s chastity“…..

Middle East Eye did an excellent article today on the rise of women on social media in Saudi Arabia – the situation at hand and what these women are fighting for. If you want to learn more, I invite you to read their article: http://www.middleeasteye.net/in-depth/features/camel-room-saudi-women-driving-debate-end-guardianship-rule-317043821

and this video is just for fun 😛

This article (Women are Calling for Equal Rights, You Can Show Your Support by Taking to Twitter) is a free and open source. You have permission to republish this article using a creative commons license with attribution to the author and AnonHQ. Join the conversations at www.anonboards.com.