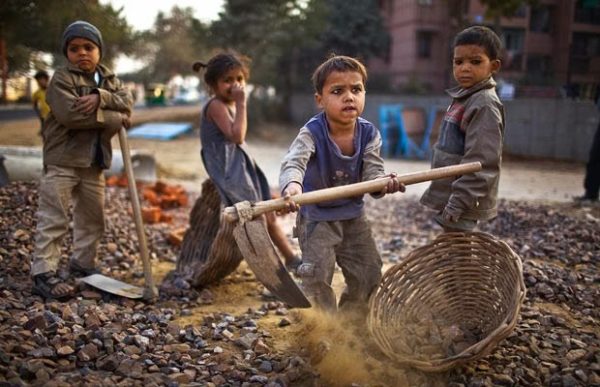 Most of us think that slavery is a thing of the past. But the truth is, the slavery in the past has metamorphosed into something else, which we come across every day.

Children are particularly vulnerable to this modern day slavery. Children who are unfortunate to have a difficult background such as parental neglect, family poverty, broken homes etc are lured by the unscrupulous into exploitation.

The United Nations, together with several nonprofit organizations, have teamed up in order to curb the inhumane practice. A former child slave, Rani Hong who was kidnapped at the age of seven in India and sold into the slave trade, has now become one of the leading personalities to work closely with the United Nations, to end the practice. Hong founded The Tronie Foundation, a trafficking awareness organization that works with the United Nations General Assembly, advising countries across the globe on how to better defend against modern slavery.

Currently, Hong and her colleagues are organizing a fundraising campaign, hoping to raise more than $1 million to help fight against child trafficking.

But before the group started their fundraising campaign, Hong told TakePart in an interview that there are four things everybody should know about child trafficking, especially those in the United States. This is simply because many of the children, especially girls, are trafficked from poor countries to rich countries. The United States serves as a perfect destination for traffickers in the Americas.

According to Hong, anyone can be a victim of the practice. Although we said victims of the practice are mostly from poor countries, Hong believes even children in rich countries can fall victims to trafficking, hence the need for a collective effort to end the practice. Hong says she has witnessed many incidents in which children in the United States have become victims of trafficking.  She reveals children of all races are lured into prostitution, with the average age of these children being as low as 13.

“They’re dreaming for their future, they’re looking for their next opportunity, and a trafficker comes in and promises them,…’I’ll give you a modeling job, or you can come work in my nail salon,‘ ” Hong says. Secondly, we should know that the trafficking business is booming. In the United States, for example, every year, it is said an approximately 100,000 children become victims of trafficking. While sex trafficking occurs in nearly every state in the country, California is said to be the “hotbed” of this illegal activity, due to its proximity to international borders. Research has shown that other potential locations for higher rates of trafficking in the United States include Arizona, Texas, and Washington, D.C. In fact, the human trafficking industry is one of the fastest-growing criminal industries in the world. The United Nations estimates that it generates more than $150 billion in profits each year. Although sex trafficking is the term many Americans are familiar with, this description often overlaps and is interchangeable with child trafficking and modern slavery. The practice of labor trafficking often includes sexual abuse. “It’s hard for us to believe that slavery still exists. We think of it as back in the 1800s. The bottom line is it’s the exploitation of a child for the purpose of making a profit,” Hong explains.

Again, we should bear in mind that traffickers come in all shapes and sizes. According to Hong, although some trafficking rings have ties to organized criminal networks, many predators appear to be run-of-the-mill civilians. Hong reveals these traffickers can be your neighbor or your teacher, a lawyer or a professor. She says women are often used in child trafficking rings because they are less intimidating and can appeal to a child’s sensitivity. The female traffickers build a relationship with victims and make them feel comfortable, before drawing them in and handing them over to the men. Also, Hong wants people to become aware of the practice, in order to help curb it to save children. Hong believes one of the most effective ways to combat child trafficking is to teach people to watch for the tell-tale signs of it. By pushing people to be more aware of modern slavery and its many manifestations, they may be more likely to spot it and report it. Some indications that a child may be a trafficking victim include the person working excessively long hours, seeming especially scared or anxious, or not knowing much about his or her whereabouts. The person may have few personal possessions, isn’t in control of his or her own money or personal IDs, and isn’t allowed to speak on his or her own behalf. Whenever we spot any of these signs, we should not hesitate to report it to any nearby law enforcement agency.

This article (Four Surprising Things an Ex–Child Slave Wants You to Know about Modern Slavery) is a free and open source. You have permission to republish this article under a Creative Commons license with attribution to the author and AnonHQ.com.