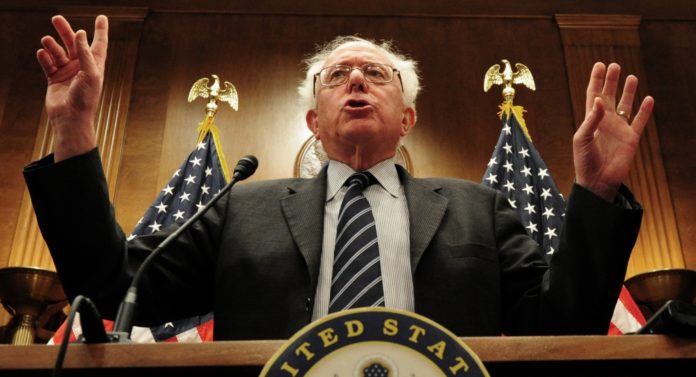 It’s time to celebrate a candidate who deserves the spotlight, more so than other candidates from either side of the left-right false divide.

Here are 10 reasons why Bernie Sanders deserves more coverage from the mainstream media and, ultimately, your vote:

1) He supports a new Glass Steagall act- hell he even detailed 5 reasons explaining why it’s important; passed over 80 years ago, it had prevented commercial banks from participating in investment banking. It was repealed in 1999, and banks used this new-found ability  to plunder the savings of their depositors by making extremely risky “investments” for their own profit. This is the primary reason for the 2008 financial crisis, and the reason why the big banks had to be bailed out by taxpayers.  Hillary Clinton doesn’t want to reinstate Glass-Steagall while Trump wants regulations on Wall Street to be weakened.

2) He wants to break up the big banks; no more of this “too big to fail” nonsense- he also voted against the bailout of Wall Street. Hillary, on the other hand, receives money and support from Wall Street. She has also voted multiple times for the bailout despite “evolving” on the issue. Trump wants to maintain the size of the big banks. He also wanted to bail out the banks.

3) Sanders opposed NAFTA and the TPP: two “trade” agreements, the first causing the loss of up to a million jobs in America and the second a formerly-top-secret agreement which would hand sweeping powers to corporations. Hillary was for the TPP and supported it a dozen times- only recently has she “evolved” on the matter. Trump hates the TPP too… but only because he thinks China would somehow benefit from it.

4) For his entire political career Sanders has stood against the for-profit prison industrial complex and the practice of over-criminalization. This issue has had Clinton “evolving” towards prison reform since… a few months back… but before entering her higher form, she lobbied in 1994 for a crime law that had increased prison funding and sentences. Trump wants to “get a lot tougher” on crime, despite police killings being the highest in two decades and despite the fact that violent crime is also down.

5) Sanders voted against the Iraq War, and is against a war with Russia. Clinton voted for the Iraq War- she also has a neoconservative war-mongering foreign policy. Most Republican candidates, besides Rand Paul, do not seem averse to war. Trump’s claim that he opposed Iraq’s invasion at the time it was debated is baseless, though he too is against conflict with Russia; China’s his whipping boy.

6) Sanders voted twice against the Patriot Act, which allowed widespread mass surveillance to be used against the American public. Hillary voted for it twice and Trump is all for reauthorizing it.

7) Sanders doesn’t degrade racial and religious minorities, nor does he inflame the majority- he comes right out and tells us that the elite are to blame. He said this at a rally: “they’re always playing one group against another. Rich got richer — everybody else was fighting each other. Our job is to build a nation in which we all stand together”. Hillary has an “abysmal” racial justice record and Trump… well, he’s said enough about that topic to fill a phone book.

8)  Sanders wants to decriminalize the use of marijuana. Clinton is against decriminalizing it and Trump seems to favor legalizing it for medical uses.

9) Bernie refuses to take money from the super rich…  or the corporations. Hillary receives money from everyone who has it- bankers, corporations… she doesn’t discriminate. Trump is already one of the super rich and admitted that he has manipulated the system for his own benefit.

10) The corporate mainstream media hates Bernie and censors him, attempting to make it look like he endorses Hillary. Trump gets WAY more mainstream coverage than Bernie despite both polling similarly. If you want to choose someone who wasn’t handpicked for you, then Bernie is your best best.
Bonus!) Whenever someone tries to come up with a top ten list NOT to vote for Bernie… it comes out convincing MORE people to vote for him- just read those top comments. On the other hand, one of the most popular search result for the top ten reasons TO vote for Trump is satirical.

Update: While it’s awesome, and an honor, that so many seem to agree with these reasons, the opinions are strictly mine own. Obviously, plenty of Anons do agree, but it would be a bit presumptuous to say that all of Anonymous backs Bernie Sanders as some might suggest.

This Article (Ten Reasons That Will Convince You That Bernie Sanders Deserves Your Vote) is free and open source. You have permission to republish this article under a Creative Commons license with attribution to the author(CoNN) and AnonHQ.com.