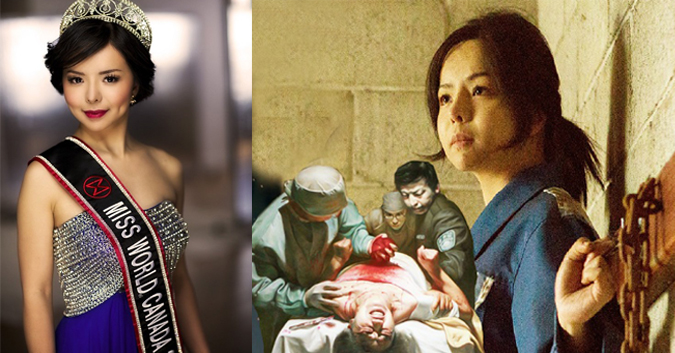 26-year-old China-born Canadian actress Anastasia Lin — who was crowned Miss World Canada in May 2015, but barred from attending the finals last year in China over her criticism of the country’s treatment of its prisoners of conscious — has turned into a human rights activist to expose the persecution of Falun Gong practitioners in China.

Two months after winning the Canadian pageant, Lin testified at a U.S. congressional hearing on religious persecution in China. In her testimony, she said she wanted to “speak for those in China that are beaten, burned and electrocuted for holding to their beliefs.”

Lin, an outspoken advocate on human rights and religious persecution in China, was referring to tens of millions of Falun Gong practitioners who have been detained, imprisoned, and slaughtered for their organs in Chinese detention camps. Falun Gong are a spiritual faith outlawed as an ‘evil cult’ by China’s ruling Communist Party in 1999 because it encouraged independent thought, hence deemed a threat to social stability.

Lin, who came out as a practitioner of Falun Gong in August 2015, says it is imperative to stop the demonization of the Falun Gong faith and give voice to Chinese people who are persecuted for their beliefs.

“It’s not an organized religion. The teachings – established by qigong master Li Hongzi in 1992 – are about finding our authentic self. And this is what I’m trying to do by speaking up. If I don’t, the oppression will never stop.”

This year, she was allowed to compete in Washington but was barred from speaking to the press as the Miss World pageant, which is largely sponsored by Chinese companies.

A vocal critic of Chinese human rights abuses, Lin was also barred from attending the U.S. premiere of The Bleeding Edge — a film that depicts China’s forced organ harvesting and in which she plays a Chinese Falun Gong practitioner who is tortured and killed before having her heart removed.

The Miss World pageant also barred Lin from meeting a State Department official, where she planned to report the continuing harassment her father experiences by security agents trying to silence her by intimidating her father. Nevertheless, Lin, who was born in China and moved to Canada with her mother when she was 13, isn’t backing down. The Boston Globe writes:

“Lin, who was born in Hunan province, was reared to believe in the absolute authority of the Communist Party and its teachings. As a student leader in grade school, she spread government propaganda that demonized practitioners of Falun Gong, a gentle meditation discipline rooted in Buddhist teachings of truthfulness, compassion, and tolerance.

“Only after emigrating to Canada as a teenager did Lin discover the truth: Falun Gong practitioners, far from being a dangerous cult, are victimized by a dangerous regime, which tortures and kills them by the tens of thousands — many via the ghastly crime of forcibly harvesting their vital organs for transplantation into patients with cash or political connections.”

Lin has riled the Chinese government by revealing that tens of thousands of Falun Gong practitioners have been killed so their organs could be harvested and sold for transplants.

“I’m talking about organs being taken from prisoners of conscience, meaning citizens who have not done anything wrong but to speak their mind and believe what they believe in. It’s like innocent citizens being killed for their organs and their body parts sold for profits. It’s happening and people need to pay attention to it.”

According to Matthew Pennington of Associated Press, the Chinese government claims it ended the long-standing practice of involuntarily harvesting the organs of executed prisoners for use in donor transplants in 2015, and replaced it with a voluntary donor system. But international medical professionals and human rights advocates dismiss these claims.

In June 2016, a report made by former Canadian lawmaker David Kilgour, human rights lawyer David Matas, and journalist Ethan Gutmann, claimed that China still engages in the widespread and systematic harvesting of organs from prisoners. This includes prisoners of conscience, and those people whose views conflict with the ruling Chinese Communist Party, who are being murdered for their organs.

The Communist Party says the total number of legal transplants is about 10,000 per year. But the report estimates that 60,000 to 100,000 organs are transplanted each year in Chinese hospitals. According to the report, that gap is made up of executed prisoners, many of them prisoners of conscience locked up for their religious or political beliefs.

Meanwhile, the European Parliament passed a declaration in July 2016 calling for an independent investigation of “persistent, credible reports on systematic, state-sanctioned organ harvesting from non-consenting prisoners of conscience” in China.

This article (Beauty Queen-Turned Activist Exposes the Evils of Human Organ Harvesting in China) is a free and open source. You have permission to republish this article under a Creative Commons license with attribution to the author and AnonHQ.com.