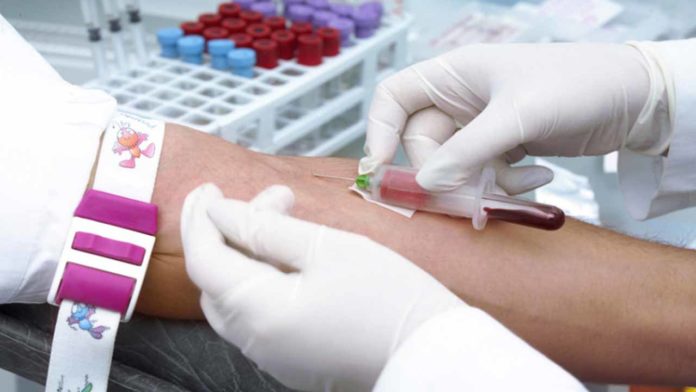 Scientists at the Boston University School of Medicine and Boston Medical Center have developed a revolutionary blood test that can predict how long you’re going to live; your chances of getting age-related diseases such as stroke, diabetes, and cancer, as well as detect early warning signs of dementia before symptoms even develop.

Based on certain “biomarker signatures” collected from the blood samples of almost 5,000 participants in the Long Life Family Study, the scientists say an analysis can occur. The breakthrough means patients will not only be able to identify realistic health risks early on, they will be able to modify their lifestyle to prevent or delay various age-related diseases.

“These signatures depict differences in how people age, and they show promise in predicting healthy aging, changes in cognitive and physical function, survival and age-related diseases such as heart disease, stroke, type 2 diabetes and cancer.

“It sets the stage for a molecular-based definition of ageing that leverages information from multiple circulating biomarkers to generate signatures associated with different mortality and morbidity risk.”

By definition, a biomarker is “a characteristic that is objectively measured and evaluated as an indicator of normal biological processes, pathogenic processes or pharmacological responses to a therapeutic intervention.” The biomarkers included in the study were linked to many functions in the body, including those of the immune system, metabolism, the endocrine system, and the kidneys. Dr Sebastiani remarked:

“Many prediction and risk scores already exist for predicting specific diseases like heart disease. Here, though, we are taking another step by showing that particular patterns of groups of biomarkers can indicate how well a person is ageing and his or her risk for specific age-related syndromes and diseases.”

The biomarker data from the blood samples of 5,000 participants revealed 26 different predictive biomarker signatures, however, about half had an average “signature” or pattern of 19 biomarkers. The different biomarker patterns, which indicated both good and bad futures, were associated with different diseases including dementia and cardiovascular disease, disease-free ageing and disability-free ageing.

A small group had specific patterns of those biomarkers that deviated from the norm and were linked with increased risk of particular health conditions, levels of physical function, and mortality risk eight years later. Dr Perls added:

“We can now detect and measure thousands of biomarkers from a small amount of blood, with the idea of eventually being able to predict who is at risk of a wide range of diseases long before any clinical signs become apparent.”

The researchers hope that the biomarker signatures found in the study can be used in drug trials in the future or to detect the effects, or absence of effects of a drug that they are looking for much earlier than current trials of drugs do.

“In addition to elucidating different patterns of aging, the signatures we discovered have a potential utility in clinical trials, testing treatments, and non-pharmacological strategies that promote healthy aging or reduce the risk for aging-related diseases.

“The predictive values of some of the biomarker signatures suggest that they could become an efficient way to assess the effect of interventions but also a more organic means of simultaneously assessing efficacy and safety of new treatments.”

But, while the Boston scientists claim the recent discovery could help transform healthcare, they caution more studies on larger groups of people are still needed to further confirm the results.

This article (Boston Scientists Develop Simple Blood Test that Helps Predict How Long You’ll Live) is a free and open source. You have permission to republish this article under a Creative Commons license with attribution to the author and AnonHQ.com.