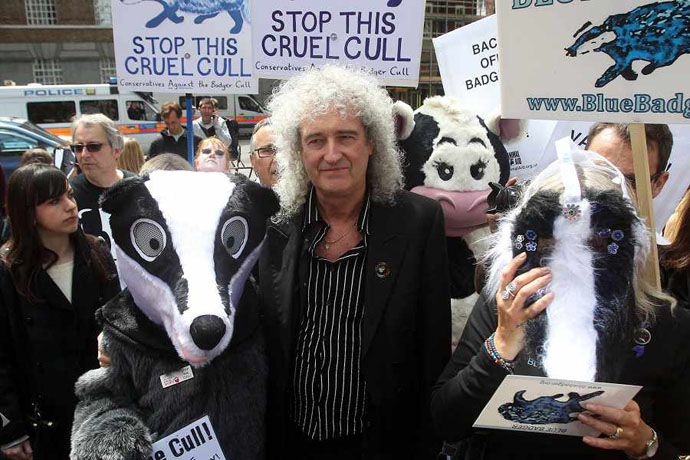 Apparently, Brian May is “seriously considering” standing as an independent in the 2015 UK election. This is according to his spokesperson who had said that the singer, who is currently touring Europe with Queen and Adam Lambert, that he hopes to run for office as part of his Common Decency Project.

This initiative did not come out of nowhere, for he has been seen to be turning more and more towards political activism.

He had been particularly vocal about animal rights, opposing the government’s decision to cull badgers, and had set up an animal sanctuary and charity called “Save Me”. It is apparently based in his Dorset estate, where he had also ironically employed a deer stalker to kill 23 of the young and healthy deer . I find it slightly pretentious when meat-eating people claim sympathy for cute animals, particularly when they themselves seem to have no qualms about killing cute animals when they prove to be some nuisance to themselves personally. Perhaps he was impassioned by the sheer scale of the badger cull? Who knows, but he has the makings of a politician already.

He has been speaking about his new campaign to his fans on YouTube, claiming that he was frustrated with the MPs from big parties who were wasting taxpayers’ money. He hopes that his Common Deccency initiative would allow online communities to encourage disillusioned Brits to use their vote. This would change the landscape of British Democracy, though to what end is unknown.

In a video he released in January, he said “I’m looking forward to getting my hands dirty, we have an opportunity in the election coming up – it doesn’t have to be this way.”

His spokesman for the Common Decency project confirmed his schedule between the tour and the election. According to May, he used to vote Tory in his youth but was an “apolitical person”. This world-view however was apparently shattered after the badger cull and he learnt that the conservative part of the party was trying to revive blood sports. Energized, he became a fierce critic of David Cameron and has often lobbied for animal rights issues.

So, what’s Common Decency? It is an initiative that Brian May had launched, in response to the domination of the two large parties that dominated parliament. Instead of two behemoths that were easy prey to corporate parties,   he hopes to see many smaller parties or independent MPs come to the fore. He hopes also to launch the website within the next month, but the movement already has a Facebook page with a growing community of supporters.