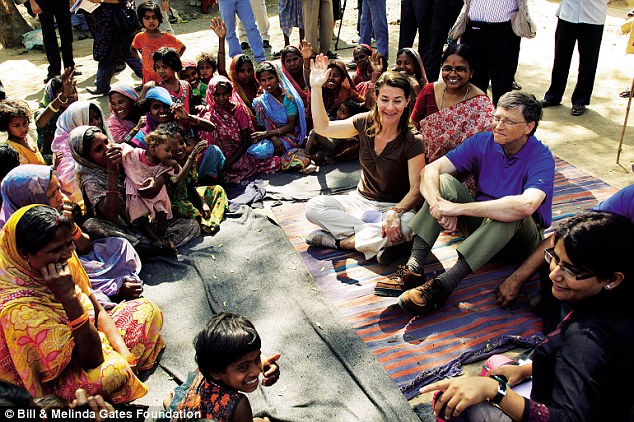 Though the Bill and Melinda Gates Foundation says its push to spread experimental vaccines and GMOs to vulnerable populations is purely philanthropic, their massive investments in vaccine and biotech companies say otherwise.

Though the Bill and Melinda Gates Foundation is popularly regarded as one of the world’s most recognizable philanthropic organizations, their multi-million dollar investments in the companies creating the very products they push on vulnerable populations suggest that any noble goals of philanthropy have taken a back-seat to cold, hard cash. The Gates Foundation spends a majority of its charitable funds supporting vaccination programs and agricultural development in impoverished and vulnerable communities, largely in Asia and Africa. Despite the great PR the foundation enjoys, these programs have a dark side and, in many cases, have greatly damaged the communities they were intended to serve.

The Gates Foundation is one of the most powerful charity organizations pushing the ironically named “Green Revolution.” This “revolution” refers not to a revolution of “green,” organic agriculture but instead the introduction of genetically modified (GM) crops to communities that had previously utilized organic methods. One of the Gates Foundation’s “most successful” initiatives in this area was the introduction of GM cotton to India. Despite the promise that GM cotton would increase yields, it turned out not to be the case as organic, non-GM yields are significantly larger. However, Indian farmers who adopted the GM crops became trapped by debt as their disappointing yields left them unable to pay for the expensive seeds and chemicals needed to cultivate GM plants. This inhumane debt slavery has led to one of the largest suicide epidemics in the history of the world, with 300,000 farmers having committed suicide over the last 20 years. Despite this travesty, Monsanto and other companies, such asCargill and Dow Chemical, benefited handsomely from India’s “green revolution,” raising the value of their stocks. The Gates Foundation itself has financially benefited as well due to its multi-million dollar investments in all three companies.

Yet, even more troubling is the conflict of interest in the Gates Foundation’s vaccination programs. Though the immunization programs sponsored by the foundation claim to offer life-saving vaccines to vulnerable children, they have been caught multiple times coercing tens of thousands of children to serve as “guinea pigs” in experimental vaccine trials, which have directly benefited the many pharmaceutical companies in which the foundation is invested. The Gates Foundation is invested in 15 pharmaceutical companies, with $52 million invested in German vaccine company, CureVac.

In 2009, 30,000 children in the Khammam district of Andhra Pradesh were given experimental HPV vaccines, manufactured by vaccine giant Merck, which they were told were “well-being” shots. Interestingly, a former Merck executive now serves as the chief financial officer (CFO) of the Gates Foundation, which has co-invested innumerous Merck projects via its Global Health Investment Fund. These experimental vaccinations led to an epidemic of seizures, severe mood swings, migraines, and menstruation problems that the community had never experienced before. A whistleblower for the NGO that had partnered with the Gates Foundation in this particular case, Program for Appropriate Technology in Health (PATH) , said that no informed consent of the vaccines were offered. Many of the children later expressed their awareness of having been signed up for the trial.

This is not the only crime associated with the Gates Foundation’s vaccine program. The foundation’s initiative to eradicate polio pushes the use of an oral polio vaccine, which is no longer used in Western countries for actually causing polio. However, Gates didn’t let this dangerous and unsafe vaccine go to waste and instead found a market for the deadly vaccine in India. Indian doctors have reported that this particular “charitable” project of the Gates Foundation has led to over 47,500 cases of paralysis. Cases of paralysis were found to be directly proportional to the the doses of oral polio received. Despite its talk of empowering the poor and eradicating dangerous diseases, the Gates Foundation treats the world’s most vulnerable people as expendable commodities, all in the name of profit.

This article (Crime Disguised As Charity: How The Gates Foundation Financially Benefits From Pushing Vaccines And GMOs) is free and open source. You have permission to republish this article under a Creative Commons license with attribution to the author and TrueActivist.com