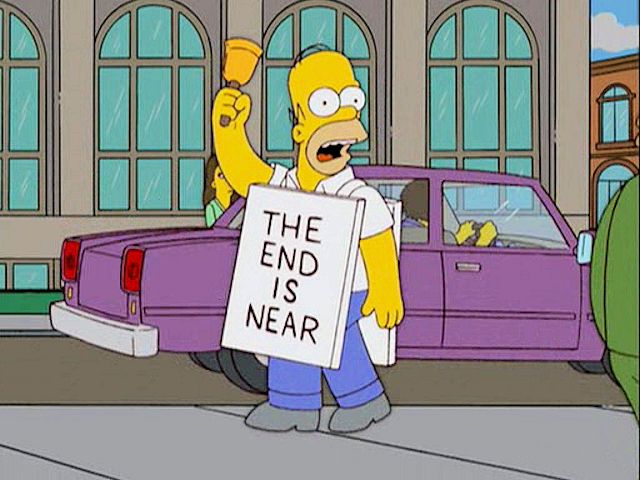 You can almost envision the doomsday sandwich board: The End is Nigh! Bring Out Your Dead! Repent Your Sins! The bell ringing, clang, clang, clang. The single individual yelling to those who scatter madly away from him. For someone who monitors the North Korean and Russian situations closely, the latest string of propagated media campaigning raises the brow to all time highs.

EMP attacks are the alleged latest craze.  Stirring fear into the souls of Americans – as though they don’t have enough to worry about – is bordering on an unusual cruelty that’s more akin to the Tubby Tyrant than those who call themselves democratic.

The latest headlines “North Korea’s nuclear EMP attack to ‘plunge US into DARK APOCALYPSE’” and if you’re anti-Russian, “Russia’s coming attack on Canada” are the preaching of doomsday whistleblowers who’ve read one too many pages from The Stand. Is it any wonder the audience switches to the Kardashians given half the chance – with no signs of repenting?

One paragraph reads: “Under the direction of President Vladmir Putin, Russia is targeting most of the major members of the western alliance…” hmmm…

READ MORE: The Anti-Russia Narrative Reveals More About Us than Them

“France, Moscow has funded right-wing populist Marine Le Pen and is alleged to be spreading false propaganda about her opponents,” hmmm, nope, still not buying it – politicians do that all the time…see Clinton and Trump [insert any politician] he-says she-says for examples.

“Russia may have meddled with the Brexit campaign…” Wasn’t there a vote? And it was a close outcome – 48.1 to 51.9 percent. Did Putin call individuals and tell them what to put on their ballots? Can the Russians afford long distance calls? Some sort of tin-foil subliminal Tweeting plot? Give the UK citizens some more credit, folks. Please.

Yes, the “country [Russia] is in bad shape” but the western imposed sanctions may have something to do with that. But is the American economy suddenly booming?

Did the Russians interfere with the US election? Maybe. But we’re still yet to see hard evidence. But then, on the other hand, we have seen evidence of the US intelligence agencies meddling in the 2012 French elections, haven’t we? So, what gives?

These headlines serve no interests but to the one specific agenda of the fear-mongering type. Yes, North Korea is angry – and if your neighbour had THAAD deployed in their yard, you would be too. You’d be straight to the council to complain, no doubt. Is crazy Kimmy going about it the right way? No, but nor is the United States. And just because you’re from the west, it doesn’t make you right.

And yes, James Woolsey, former CIA director who wants to give Edward Snowden the death sentence warned of an EMP threat…in 2005 and 2008. Hardly seems relevant to now, but back then it was in the context of Iran. He also said it in 2013, 2014, and 2016, in context of North Korea and Iran. EMPs aren’t to be mocked, but Woolsey’s decades long argument is hardly 2017 breaking news.

If there’s any possible way to get ourselves out of this mess, then the first place to start is by adding intelligence to the conversation – not mass hysteria to-hell-with-the-consequences attitude for the sake of it. Then try some research. Compile your findings. You may very well be surprised.

This article (Media Reports EMP Attacks, Russian Invasions; The Sky is Falling Too) is a free and open source. You have permission to republish this article under a Creative Commons license with attribution to the author AnonWatcher and AnonHQ.com.