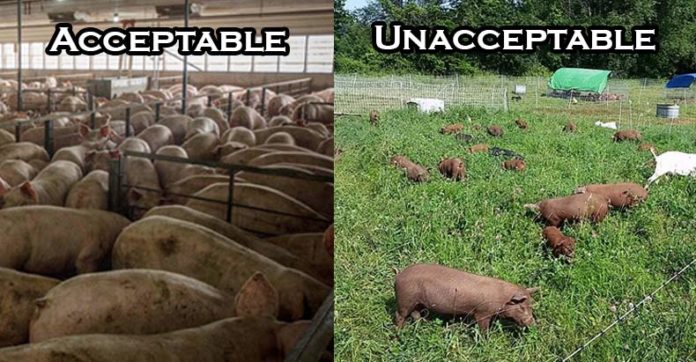 Schenectady County, New York – Earlier this month, a family farm in rural New York was raided by police.  The owners were cited on a number of “regulatory violations”. The owner of the farm, Joshua Rockwood,  is being accused of mistreating his animals; an excuse for the local government to confiscate them.

Police initially visited Rockwood’s property on February 25th to investigate reports of unlicensed working dogs, weeks before the raid. Unfortunately, Rockwood naively decided to voluntarily show local police around his property. After showing them around, they wrote a number of citations for arbitrary offenses.

The very next day, a veterinarian visited the farm to check on the animals and confirm that they were well taken care of and in good health. The vet said that the animals were just fine, and did not seem to share the “concerns” that the officers alleged during their walk-through…

A second veterinarian was also called in to verify the health of the animals and they also found them to be in perfect health.

A week later, police returned again to notify Rockwood that he was to appear in court on a number of charges relating to the animal’s food and shelter. In total, 12 different charges were brought against Rockwood, but he has posted a number of photos to a Facebook support page, which shows the animals with sufficient housing, and plenty of food.

Rockwood has been charged with 12 counts of animal neglect and abuse. These charges come despite the appearing to be in good health. His dogs and horses have been seized and taken away.

Rockwood treats his animals better than most factory farms do, but since he uses traditional farming methods, his farm will fail regulatory inspections, while factory farms will pass.

Meanwhile, New York is one of many states that are currently considering “ag-gag” laws, which place criminal penalties on activists who expose animal abuse at factory farms.

These laws prohibit the “recording an image or sound without the operator’s permission; gaining ‘access to an agricultural operation under false pretenses;’ asking for a job at a place for the purpose of making recordings; and making a recording while trespassing.” Interesting, so this law prevents us from filming and thus proving animal abuse that goes on in factory farms, but your paid-for police are free to disregard any evidence that proves that an honest farmer was treating his animals well. Ridiculous.

The irony here is that the state will lock you in a cage for filming the horrific atrocities at a factory farm while simultaneously trumping up ridiculous and petty violations if you aren’t a factory farm. Just who does the state “protect” by doing these things? Why, the factory farms that bribe…. I mean lobby them.

Rockwood has launched a $50,000 gofundme campaign to raise money. He intends to use the money to post bond for his horses and to pay for the disrupted legal fees and lost business he has incurred and will incur due to the publicity and effort involved in defending himself. He means to go to court to try to fight the charges and to win back his reputation, his rescue dog, and his horses.

Thankfully, he is almost halfway to that goal; how has the law become so skewed that a farmer who cares for his animals BETTER than a factory farm is treated like a criminal, while finding evidence proving that factory farms are abusing animals makes us criminals.