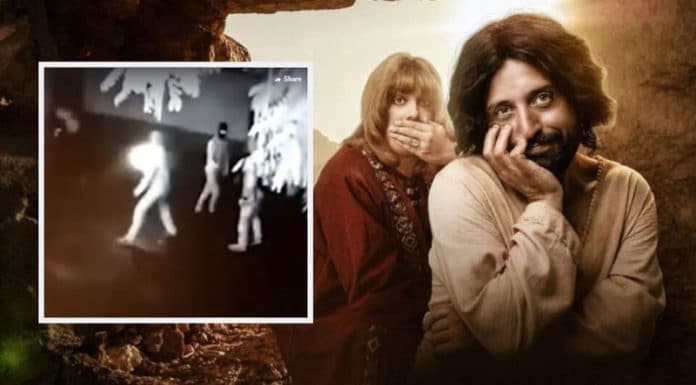 The comedy studio responsible for the new Netflix film The First Temptation of Christ, which features a storyline with a gay Jesus, was attacked in a firebombing on Christmas Eve. A group of men reportedly threw Molotov cocktails at the Porta dos Fundos headquarters in Rio de Janeiro, according to local police.

No one was hurt in the incident and the fires were put out before causing any major damage. Luckily, the headquarters was an empty video production house that was heavily secured and not occupied at the time. It is likely that the attackers went to the most public address listed for the studio.

Police say that a group claiming responsibility for the attack sent a video, but that the video has not been released to the public. The video has the digitally altered voice of a person admitting to the attack and preaching of the need for strict nationalism in Brazil.

The video also showed clips of the attack, which police have authenticated with security footage from the night of the incident.

The studio’s new film has been extremely controversial in Brazil—the country with the largest Catholic population in the world.

Police suspect that the attackers were motivated by the film but are still investigating other possible motives. The video released by the attackers mentioned that the comedy studio was targeted over their Portuguese-language program. The suspects are claiming to represent a group called the Command of Popular National Insurgence, which was a popular fascist movement in Brazil during the 1930s.

A statement from the police said

“Terrorism was not classified at first, but we do not rule out any hypothesis.”

While none of the suspects have been arrested, police were able to identify the vehicle and motorcycle involved in the attack. Police have also confirmed that there were at least four suspects.

Fabio Barucke, a senior official with the Rio de Janeiro police, seemed optimistic that the suspects would be found.

“We are going to find those responsible as fast as possible, also to prevent any future actions that this group may be planning,” Barucke said, according to NBC.

Porta dos Fundos made a short statement on Twitter about the incident:

“The country will survive this torment of hatred, and love will prevail together with freedom of expression.”

Security camera footage of the incident can be seen below: