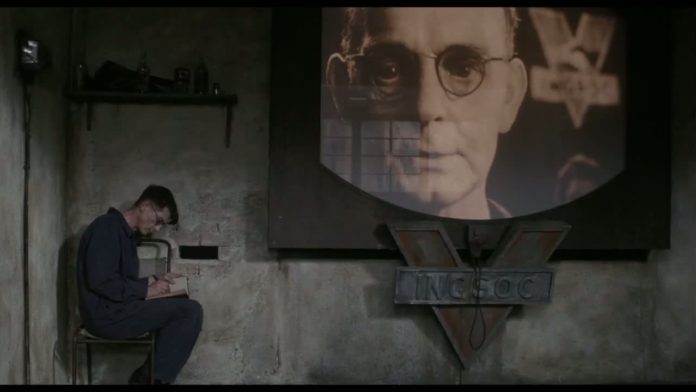 George Orwell’s 1984. It’s the internationally acclaimed dystopian best seller that some say depicts a prophetic view and a chilling warning to us all. Between the pages of ’84 are the dire consequences for man, when propaganda is at its height; for when a government rules with an ironclad fist. War is Peace. Freedom is Slavery. Ignorance is Strength. The three phrases printed within the first few pages of chapter one echo across today’s current state of chaos.

From a modest background, Orwell was educated at St Cyprian’s on a partial scholarship until a place at Eton became available. He served for a short time in the Indian Imperial Police in Burma, then in the Spanish Civil War, and later he often wrote essays and articles for a barely-paltry living.

Experiencing communism, and labeled a fascist supporter, Orwell drew on his experiences with various governments and walks of life. At one stage, he experienced the streets of London as a tramp and experienced poverty first hand, recording the hardened truths of social class in Down and Out in Paris and London. It was then the name ‘George Orwell’ was invented, not wanting to embarrass his family with the publication.

But Nineteen Eight-Four held a mystique unlike other books Blair published under his George Orwell pseudonym. It followed acclaimed post war era Animal Farm, and was published in 1949. It was written at a time when Orwell worked primarily as a journalist, usually focusing on political content, and at a time when his health was failing him. By early 1950, George Orwell had succumbed to tuberculosis. In a world of perpetual war, where governments concoct enemies and seed society with fear and propaganda, Winston Smith, the protagonist holds a job with the Ministry of Truth. Rewriting historical documents to levy up with current propaganda, ensuring the government doesn’t trip itself up, Smith craves a moment of freedom and dreams of rebellion. He secretly hates the ministry and is all too aware of the forgeries of documents and disintegration of history.

Reflecting on today’s world, Big Brother is a term well understood in all its complexity. But it isn’t a term we should heed to the forefront.

The Industrial Military Complex of today’s real world isn’t so far away from Orwell’s and Winston Smith’s world. Iraq, Afghanistan, Syria . . . now North Korea, Iran and the problems at the South China Sea are slung onto our media platforms as we become immune to the ceaseless ISIS campaigns. The government continually reinvents the war wheel to keep the citizens distracted.

For the government, Freedom is Slavery. Fiction and non-fiction alike, the parallel between 1984 and 2016 is difficult to dispute.

When 9/11 occurred, the face of the world changed. It was the pinnacle of what was to become an era of security, terrorism and surveillance. The War on Terror facilitated the government’s need to watch everyone.

1984 depicts a Winston Smith as a slight man, miserable and all too aware of the screen watching his every move. He rents out a room in hopes to escape the glaring eyes and ears of Big Brother.

The paranoia he feels in the book is akin to our own today. Are we truly free from servitude? The Five Eyes Global Alliance, the Department of Homeland Security – amongst others . . . the Snowdens, Mannings and Assanges of the world truly believe we are not. Is the government dumbing us down on a daily basis? From a sub-standard education system to the left versus right, the list of 21st century problems dumbing us down is endless. But what about basic language skills?

1984 has multi-layered meanings hidden within its pages, the most obvious being “Newspeak” and “Thought Crime.”

Newspeak: A controlled language, set to restrict and avoid ambiguity. Its aim is to reduce the need for words, and is designed to control the citizens. From Newspeak we see free thought lessened, suppressed and the individual becoming part of a collective government cog. (Mainstream media, Facebook, Twitter.) There is no individuality and no room for self-expression. In one word is censorship. In another, it is conformity.

The very essence of these three slogans is “Doublethink;” a byproduct of Newspeak, where two beliefs are held true, though contradictory.

Thought crime and the Thought police are also much of what we see today in our censorship leaders. Suppressing the freedom of thought and the ability to verbalize it (Political Correctness, anyone?) risks attack against your own ideology. It assists with the government governing and dealing with unorthodox actions. While we remain ignorant of optional ideologies, the governments of this world remain strong. Divide and conquer, they say.

Not so long ago, Twitter boasted the ability to newly track protestors down depending on the hashtags they used. China has stated they are looking into pre-crime as a genuine means to arrest citizens before they commit ‘the act.’

The glimpse Orwell gave us 67 years ago is more true to a warning today than ever in the past. Rather than prophetic, Orwell, though his years of writing experience, serving in war and poverty; his understanding of man and the intricate nature of the government provided a prolific writer the means to document the writing on the wall. If he were alive today, one wonders how the world would silence him.

This article (George Orwell’s 1984 Wasn’t a Government Instruction Manual, it was a Dire Warning to Us) is a free and open source. You have permission to republish this article under a Creative Commons license with attribution to the author AnonWatcher and AnonHQ.com.