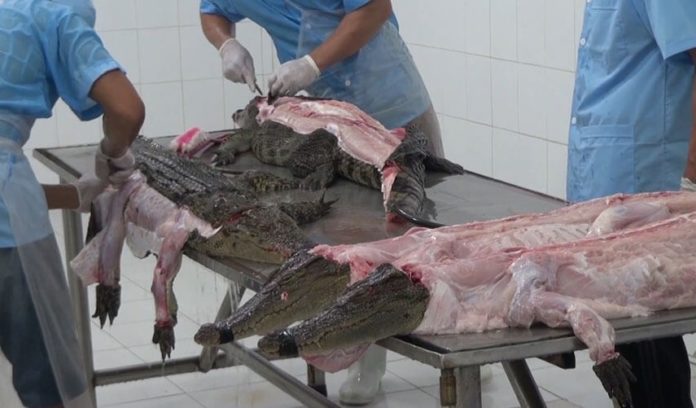 WARNING: After watching this deeply disturbing and chillingly graphic 3-minute video, you will never buy crocodile skin bags ever again. Crocodiles in Vietnam are skinned alive to make “luxury” leather bags, belts, and watchstraps for the world’s leading fashion brands – including Louis Vuitton – a horrifying undercover investigation has revealed. Crocodiles were also filmed lying motionless in tiny concrete cells, some narrower than their own bodies. Others were found jam-packed by the dozens into barren concrete pits.

In a video taken from inside two crocodile farms in Vietnam [the country exports around 30,000 crocodile skins every year], animal rights activists from People for The Ethical Treatment of Animals (PETA) have exposed how tens of thousands of crocodiles are put through “overly-restrictive, under-stimulating, and inhumane conditions” before they are slaughtered to make fashion accessories such as bags, wallets, belts and shoes worn by a host of celebrities – including Gwyneth Paltrow, Victoria Beckham and Ashton Kutcher.

One Louis Vuitton crocodile skin handbag can sell for £25,000.

At first, the vigorously shaking crocodiles are given an electric shock; their necks are then cut open and metal rods are rammed down their spines while they’re still alive, making the crocodile bleed out. The poor reptiles are skinned while still bleeding and moving — a process that takes 15 to 20 minutes; the crocodiles remain conscious for over an hour after their spinal cord has been severed and their blood vessels cut.

Consultant biologist Clifford Warwick reportedly told PETA that “the neck incisions would have been very painful and inhumane”, and that “there is no probability that these animals died instantly”. Forbes reports:

“A deep incision is first made across the back of the animal’s neck, before a steel rod is driven down their spinal column in a practice known as “pithing”, to destroy nerve tissue. Some of the crocodiles can be seen still moving after their skins have been completely removed. A worker at one of the farms, interviewed in the video, says it is not uncommon for the crocodiles to take several hours to die.” Can you help stop this cruelty? Can you stop buying products made from animal skins? Can you make sure you don’t end up with skeletons in your cupboards? Can you urge fashion brands to shed using exotic skins?

PETA President Ingrid Newkirk calls on consumers, Vietnamese Department of Agriculture, and LVMH [the parent company of fashion brands including Louis Vuitton, Givenchy, Christian Dior, and Marc Jacobs] to intervene and save the poor reptiles:

“Whether it’s Louis Vuitton, Hermès, Prada or any other brand, a crocodile skin bag means a living, feeling being experienced a miserable life and a ghastly death. PETA is calling on everyone not to buy exotic skins to prevent reptiles from being imprisoned, mutilated and skinned alive.”

This article (Graphic Video Exposes How Famous Brands, Like Louis Vuitton, Make Crocodile Skin Bags) is a free and open source. You have permission to republish this article under a Creative Commons license with attribution to the author and AnonHQ.com.