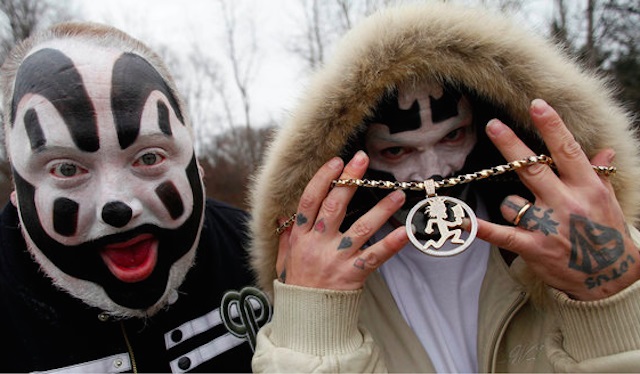 The Gathering of the Juggalos: It’s that special time of year when art and culture collide in a cacophony of neon hair, face paint, and Faygo. For the last 16 years, Juggalos and Juggalettes from around the U.S. (affectionately known as “the family”) have come together to celebrate one of the last, true American subcultures. The gathering was founded in 2000 by Robert Bruce, also known as “Jumpsteady,” and his brother Joseph Bruce (Violent J), and Joseph Utsler (Shaggy 2 Dope). Together Violent J and Shaggy form the flamboyant duo heading the band, Insane Clown Posse (ICP), and this year we were able to catch up with them to discuss some of their charity work, as well as their current struggles with the Federal Bureau of Investigation.

After mingling with the band, our ICP liaison, NoNinjalette, met with Psychopathic Records Director of Public Relations, Jason Webber (J Webb) who graciously agreed to fill us in on the band’s recent activities. J Webb: Just this past February the Insane Clown Posse held a free benefit concert in metro Detroit at the Masonic Temple which holds, I believe, about 12,000 people, and the concert was completely free. Anybody could come in. The only stipulation was that if you showed up, you had to bring at least two cans of food for the Gleaner’s Foodbank of Southeastern Michigan. We raised several thousand meals for that charity. As a matter of fact, one of the main people at the foodbank sent me an email saying, “I’ve never seen so much Chef Boyardee in one place,” because ICP was interviewed by a local FOX affiliate and they said, “Do not bring any bullshit food.”

In other words, bring only canned goods that people want to eat, because both Violent J and Shaggy grew up very, very poor. They grew up with the families on public assistance, and they actually ended up having to get most of their meals from foodbanks. So they knew that a lot of times when people donate to foodbanks, they donate the stuff in their pantry that people don’t want. They donate like canned yams, and pumpkin mix, and lima beans. So they were very, very adamant about that, they said “no bullshit food.” So everybody brought Chef Boyardee, Spaghetti-O’s, and Macaroni & Cheese. (Joseph Bruce, AKA “Violent J” in his youth.)

Now, this is just the most recent instance of Insane Clown Posse taking a strong interest in charity work. They’ve held several food drives on many of their concert tours, like for example on their Wicked Clowns from Outer Space tour in the early 2000’s, they held a food drive at every single one of the shows.

Also every Christmas, Sugar Slam, who is Violent J’s wife, holds a toy drive for Toys for Tots. Every year it’s huge—we actually filled up an entire room from ceiling to floor with nothing but toys. It was amazing. I mean, it looked like a stockroom at Toys R’ Us. (On the left, Michelle Rapp, AKA “Sugar Slam” with ICP liaison, NoNinjalette.)

So, ICP’s other charity work… At the 2013 gathering, they worked with this Make-a-Wish family. There was this young man named Cody who was 17, and he’s got this very, very rare liver disorder. We don’t know how long of a life he has to live, but his wish at the Make-a-Wish Foundation was to attend the gathering.

So he came, he spent the afternoon with ICP—hanging out in one of their buses—just chilling. Then ICP said, go to the merch-stand and tell them that we said you can have all the CD’s and DVD’s you want. So, they came away with a whole suitcase, and I actually stayed friends with the family. They’re still very good friends of mine. So ya, Make-a-Wish, Toys for Tots, food drives, they’ve done coat drives too—lots of coat drives. In 2011, the FBI classified the Juggalos as a gang, and ICP has since taken on the Federal Bureau on behalf of their fans, though it’s been an ongoing struggle.

NoNinjalette: Are they going against the FBI again?

J Webb: Well, yes, that case is certainly ongoing. At first the case got initially thrown out by the judges, however, they quickly appealed it and they just went to the appeals court at the end of June. June 25th, to be exact, and the council of judges heard arguments from both ICP’s lawyers, and also the FBI’s lawyers.

They’re still waiting on the terms of that decision, but if you listen to the audio recording of that court hearing, it’s pretty obvious that ICP’s lawyers really kicked ass. The thing is, this isn’t really surprising because the whole “Juggalos are a gang” designation is just complete and absolute balderdash. It doesn’t make any sense to label fans of a music group, or a musical subculture, a gang. I mean, why aren’t deadheads a gang? Why aren’t…

J Webb: Ya, the KISS army, Lady Gaga’s little monsters… I’m a little monster, you know? Freakin’ a, does that make me a gang member? So no, I mean, the FBI designation is a really slippery slope. But, so far the FBI’s been able to hold onto that just because of the judge who threw the case out. Our legal team knew going into it that it was going to be a fight because so many judges are very conservative. There are some judges who, if you have some weird hair, or whatever, you’re not… But then you also have those very philosophic-thinking punks who view punk not as a dress-style, but as a way of life, and also a personal philosophy. The most punk rock chick I ever met in my life does not have one single piercing, one single tattoo, and she’s not straight-edge or anything like that, but she’s not a stereotype whatsoever. She goes to church every Sunday, and her favorite band is Black Flag.

This is America. We tend to want to suppress that which we do not understand, and this has been going on since time immemorial. To paraphrase Marilyn Manson, “I don’t understand it, so if I can’t eat it or fuck it, I’m going to try and kill it.” We will continue to provide updates on ICP’s battle with the FBI as events unfold. In the meantime, we would like to extend our congratulations to ICP for another successful gathering, and for their exemplary charity work. We’d also like to give a special thanks to our ICP liaison, NoNinjalette, for a job well done.

This Article (Insane Clown Posse: Annihilating the Stereotypes) is free and open source. You have permission to republish this article under a Creative Commons license with attribution to the author and AnonHQ.com

Webber, Jason. “The Gathering of the Juggalos.” Interviewed by NoNinjalette. Thornville, Ohio. 23 Jul. 2015.