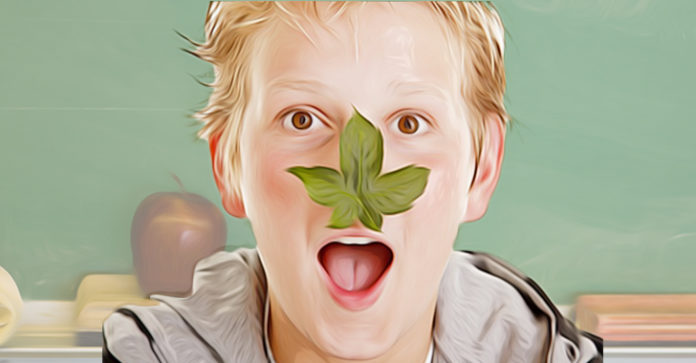 Bedford County, Va- It seems lying about weed is a particularly bad idea. Just ask the 11-year-old son of Bruce and Linda Bays. He was suspended from school for 364 days and charged with possession of marijuana-even after it was proven on multiple occasions that the plant was not weed.

When vice-principal Brian Wilson and school resource officer M.M. Calohan found out, he was suspended. Then they decided to report the kid to the police, because Marijuana-smoking via non-marijuana-leaf is clearly reaching epidemic proportions among 11-year-old-imaginary-drug-abusers.

The boy’s parents are ironically also school teachers, and were appropriately outraged by this strange predicament. The family lawyer, Melvin Williams, said:

“Essentially they kicked him out of school for something they couldn’t prove he did…The field test came back not inconclusive, but negative…Yet she went to a magistrate and swore he possessed marijuana at school.”

In order to explain their unwarranted, and simply absurd, reasons for suspending and then prosecuting an 11-year-old-imaginary-leaf-dealer, the official story has had to evolve several times.

While their son claims to have no idea how the leaf had even ended up in his backpack, Wilson initially claimed that he was seen in a bathroom with a lighter (one wonders how that little piece of information might have even been available to the vice principal to begin with). Next Wilson claimed the would-be leaf-dealer was in the classroom. Finally, Wilson even claimed that the boy had said that his parents were growing marijuana in their backyard, and that a high-school kid had given the boy the leaf and a lighter while he was on the bus.

“I asked, ‘Can I see the leaf?’ and the deputy said, ‘No, it’s already in evidence.’ We have never seen the leaf. He’s been out of school for six months.”

At a juvenile court hearing in November of last year, the family was informed that the prosecution was filing for a continuance of the case because they had not tested the leaf for marijuana. When the family rejected this continuance, they were told that the court would drop the charges, because the leaf had been already tested three times. All tests were negative for marijuana, and positive for being a leaf.

Even AFTER it was proven that te leaf was not marijuana, the boy remained suspended from school and was only allowed to go to an “alternative education” institution(is that like what we do here? Does he learn of the real history of the Vietnam War, started by false-flag?) where he will be patted down daily (nope…. What sick person pats down an 11-year-old kid for imaginary marijuana?). He was also offered the chance to study at home, but would be forced to return to “alternative” “education” if he fell behind. Talk about motivation to do well in school.

The boy was even seen by a psychiatrist, at the school’s request, for substance abuse problems. The psychiatrist found no evidence of such problems, and recommended that the school allow the boy back into class. He has switched schools as of this week, and is on strict probation until September. The Bays have filed a federal lawsuit against Wilson and Calohan, claiming malicious prosecution and violations of due process.

This is unfortunately nothing new in America: a boy was punished for sharing food with a friend while one student was suspended for making “terroristic threats” when he brought a Lord of the Ring toy to school and started acting out a scene from the movie. These kids should just thank their lucky stars they weren’t just shot on sight by police officers for no reason…. I mean, come on, we have drug-dealing-terrorist-kids acting on behalf of their Lord Sauron, spreading food-allergy-WMDs- The US army had less reason to be in Iraq, and somehow managed to kill 1.4 million people there.

I’m actually surprised that the cops did not break out their fresh hollow-point ammunition and run the children over in their haste, with their militarized mine-resistant armored personnel carriers….. And that’s just how depressing news in America has become.