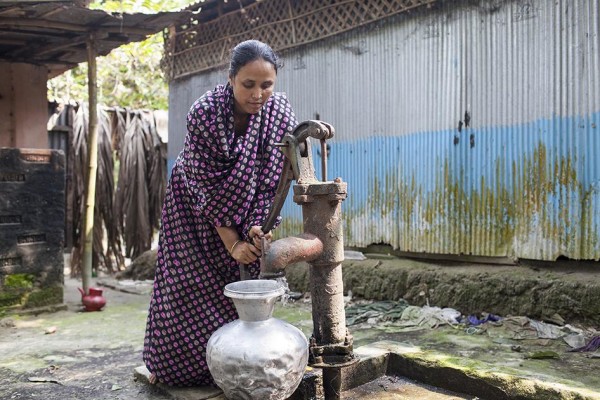 Arsenic is a natural element of the earth’s crust. It is used in industry and agriculture, and for other purposes. It is also a byproduct of copper smelting, mining and coal burning. Most arsenic enters water supplies either from natural deposits in the earth or from industrial and agricultural pollution. Drinking of arsenic water causes cancer; affect the nervous and respiratory systems, and impacts severely on child development.

According to HRW, the current situation in Bangladesh is as result of nepotism and poor governance on the part of the political leaders of the country. Health experts say naturally occurring arsenic was discovered in shallow tube wells across large swaths of rural Bangladesh, about 20 years ago. The international community then raised awareness, supporting the Bangladeshi government to provide deep wells for its rural population.  However, somewhere along the line, the government stopped prioritizing the situation, culminating into the current crisis.

The poison is still found in mostly shallow, hand-pumped wells in rural parts of the country, where it is the only source of water for the population. An estimated 43,000 people die from arsenic-related illnesses every year in the country.

Based on interviews, and a survey of 125,000 deeper government-dug wells from 2006 to 2012, HRW found that there was little monitoring or oversight on them. Some had deteriorated without repairs, forcing people to revert to using shallow available wells.

And to even worsen the situation, HRW found that politicians were prioritizing digging new wells for friends, family, political supporters and allies, rather than in areas where they are badly needed. Deeper water wells can usually access non-arsenic poisonous water, but the wells are more expensive and out of reach for the poor living in the rural areas.

HRW also found a serious lack of monitoring and quality control in arsenic mitigation projects. In a small but significant number of cases, some new government wells are themselves contaminated with arsenic above the national standard. A HRW analysis of government data found that 5 percent of the wells reviewed were contaminated above the Bangladesh standard.

The World Health Organization (WHO) has responded with strong words to the report. WHO labeled the report “the largest mass poisoning of a population in history.” The Bangladeshi government has also responded by screening about 5 million wells, painting them red for unsafe and green for safe.

A senior researcher at HRW who served as the lead author of the study, Richard Pearshouse blamed the political leaders of Bangladesh for the plight of the rural poor who have been poisoned by drinking the unhealthy water.

“Bangladesh isn’t taking basic, obvious steps to get arsenic out of the drinking water of millions of its rural poor. What we found was basically poor governance. There is no technical problem that can’t be solved if the political will is there. But what we see is that the government is using many of its valuable resources in areas where there is no need for deep tube wells from the government,” he said. Meanwhile, in the rural areas of the country, many people do not even know the effects of arsenic poisoning, and thus continue to use the water out of ignorance.

“I’ve never been to a hospital; I’ve never seen a doctor. I take no medication. No one from the government has ever told me anything about arsenic or that I suffer some effects of arsenic poisoning,” one women in her 40s in the village of Ruppar suspected of having been poisoned told HRW.

This article (Largest Mass Poisoning in History: 20 Million People in Bangladesh still Drink Arsenic Contaminated Water) is a free and open source. You have permission to republish this article under a Creative Commons license with attribution to the author and AnonHQ.com.