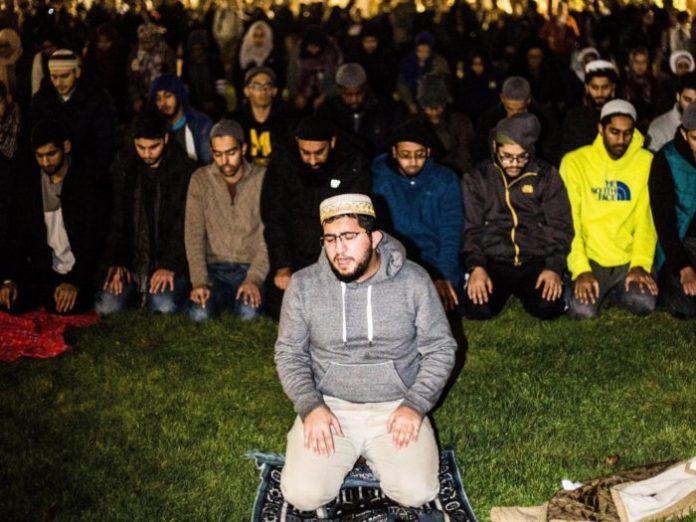 Islamophobia is spreading in Western countries, especially in the United States. In fact, since the then Grand Old Party nominee Donald Trump made the disparaging comments that Muslims should be banned from entering the United States, hate crimes against Muslims have surged in the country.

On Sept. 10, 2016 – before Trump was elected – a Muslim tourist from Scotland had her religious garb set on fire by an unidentified man in the middle of New York City. The woman was window-shopping on Fifth Avenue near East 54th Street in Manhattan, while wearing her Islamic traditional religious attire known as an abaya and hijab. The abaya covers the whole of the body, except the face. The hijab cover the head. All of a sudden, the woman started feeling heat on her body. When she turned to inspect her attire, lo and behold, it was on fire. She then saw a man standing next to her with a lighter in his hand before he quickly absconded without leaving a trace.

Now that Trump has been elected, things have worsened regarding the safety of Muslims in cities across the country. There have been numerous reported attacks against Muslims since Trump won the highest office of the country in November 2016.

In the latest of such attacks, an unidentified man verbally assaulted a Muslim student for wearing a hijab on Michigan University’s campus. According to Ann Arbor police, the man ordered the Muslim woman to remove her hijab or he would set her on fire with a lighter, just like the New York City incident. The woman, sensing danger, fled the scene and reported the matter to her colleagues. The matter was subsequently reported to the police.

The university’s Muslim Students’ Association (MSA) took the matter up and shared the appalling story on Facebook and other social media outlets. It quickly went viral, with many audiences sympathizing with the woman while condemning the man. Many urged the police to find the man and put him before a court of law.

The MSA decided to organize a public prayer session, inviting non-Muslims to attend and show solidarity for their colleague who encountered the situation. Surprisingly, the turn-out was massive.

The students didn’t just honor the invitation, they did something encouraging. The non-Muslim students formed a circle around their Muslim classmates so they could pray safely without anything nasty happening to them.

Farhan Ali, president of the MSA, said he and his Muslim brothers and sisters were overwhelmed when they saw the crowd standing guard as they performed their Ishaa prayer at the University’s main square. The Ishaa prayer is the final of five compulsory daily prayers performed by Muslims.

“Some individuals were afraid that we might be vulnerable during our prayer, so we had the idea of calling allies to support us and create a circle around us while we prayed and they ensured our safety,” Mr Ali told the Huffington Post in an interview.

Ali also said in an email to reporters: “Hundreds and hundreds of people came out for both prayer and showing their support. The amount of support was overwhelming and absolutely wonderful, and it brought some ease to the Muslim students [and] showed that we have other individuals who are willing to stand with us.” Mohammed Ishtiaq, the university’s Muslim chaplain also told the Huffington Post that both the Jewish and Christian communities on campus came out to show their support. He said some members of the crowd held signs that read Muslims belong in the school.

“Although it was a cold night, the amount of support we got was really heartwarming. Events of solidarity like this give us hope,” Mr Ishtiaq said.

The Muslim students admitted that there was some sadness, fear and uneasiness among the Muslim community in the university after Trump was declared the winner of the presidential election. But the group said they are now trying to mobilize and organize to show people that Islam is a peaceful religion that doesn’t advocate for hate and violence.

The Daily Mail reports that since the 9/11 attack in the United States, the number of hate crimes against Muslims has grown significantly, from between 20 and 30 per year to 500. The Washington Post puts the number at 100-150, roughly five times higher than before 9/11. The election of Trump has further worsened the situation. According to observers, the current happenings in the United States are what terrorist organizations, such as the so-called Islamic State of Iraq and Syria, want. The terrorists’ main goal is to stir reprisal attacks against Muslims in the West, in order to convince them [Western Muslims] that the West hates Islam.

This article (Man Threatens to Set a Muslim Student on Fire for Wearing Hijab, Students Respond by Forming Protective Wall) is a free and open source. You have permission to republish this article under a Creative Commons license with attribution to the author and AnonHQ.com.