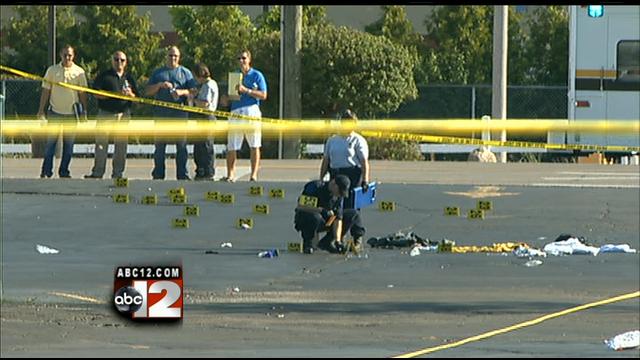 Another instance of a gunshot by police had been taped on camera. Milton Hall, a homeless man aged 46 years and was mentally ill was recorded being gunned down by eight Saginaw, Michigan police officers in a video released this week by ACLU.

This event occurred in July of 2012, from the video we see a strong confrontation between the two parties (Milton and the police officers containing a K-9 police unit). Milton was reportedly having a verbal dispute with one of the employees of a local store when police arrived; Milton was armed at that time as he was holding a pen knife when he was brutally murdered.

So, what does the video shows us? In the video we can clearly see an old man fenced by cops and violently disturbed by the police dog in a Saginaw parking lot. This continued for some time and taking their steps nervously the eight officers decided to shoot and fired 46 hard bullets. However only 14 of those bullets hit Milton’s body, but they were enough to kill him. From the video which recorded the brutal series of gunshots to Milton, clearly shows that he was not causing any threat for the officers at that moment but the officers had their suspect outnumbered and pinned back at the exact time of the fighting squad style murder.

After being hit by 14 bullets Milton was lying unconscious, one of the eight officers decided and took the responsibility to turn the dying man, handcuff him and then stick his foot into his back.

After some investigation on this incident the U.S. Justice Department found all eight officers involved in it as innocent and didn’t did anything wrong to Milton. Earlier this year, in February the DOJ published joint statement with the U.S Attorney’s Office for the Eastern District of Michigan and the FBI, it stated:-

After a thorough investigation, federal authorities have determined that this tragic event does not present sufficient evidence of wilful misconduct to lead to a federal criminal prosecution of the police officers involved.

Jewel Hall, mother of Late Milton Hall, had a talk with the ACLU of Michigan related to the murder of her son in which she stated:-

When you have the U.S. government go in and look at Milton’s case for four or five months and then come out and say, “Well, it wasn’t intentional.” To shoot at somebody 46 times and it wasn’t intentional? It has given me a commitment for the little time that I have left to work with parents whose kids have been similarly killed.

What needs to change is how police deal with situations like the one that ended in my son’s death. The elected leaders and community leaders must address conditions that allow police to use excessive and deadly force with impunity.

Mrs Hall now dedicates her life to helping and assisting families whose loved ones have been murdered by law enforcement.

You can see a brief interview with Mrs Hall and the graphic police shooting for yourself below.

You can watch the video here: https://www.youtube.com/watch?v=2Iigvm5iPkU