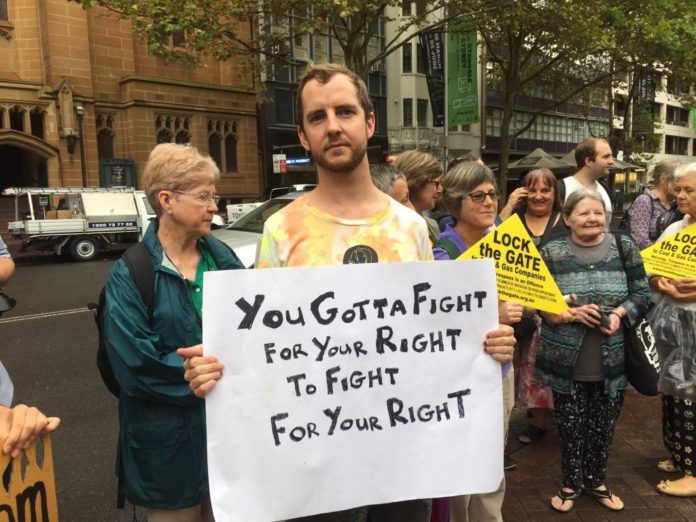 Today marked a day of protest in the Australian state, New South Wales. The protests, however, were protests for the right to protest, as the government responded with newly laid out anti-protest laws.

Debate is continuing this week after hundreds of people rallied together to shut down part of Sydney’s CBD, rallying against the “draconian” changes proposed with the new legislation.  The rally of almost 500 protesters armed with placards, stood at the front of the state parliament “You gotta fight for your right to fight,” shutting down busy Macquarie Street on Tuesday morning.

The new laws would see increased fines to anyone who entered mining and coal seam gas sites from $550 to 5500. The fines could also carry up to 7 years’ imprisonment for protestors deemed guilty, reported Nine News.

Greens MP Jeremy Buckingham showed support for the protestors, announcing plans to vote against the laws he claims are designed to intimate protestors and benefit big industries such as the mining corporations. “It’s a community’s right to collectively band together and protest,” he said.

The laws will also give police extended powers under the proposed legislation set to be introduced into parliament this week, and limit peaceful protests. Currently under section 200 of the Law Enforcement Act, police are limited with what they can do in genuine protests and industrial disputes. The NSW Bar Association argues that the proposals will remove the “important check on police power to ensure some balance…” The Guardian reports.

“The Law Society is very concerned with the apparent trend of expanding police powers without corresponding judicial and other safeguards,” their submission read. “In our view, such a trend would represent an erosion of long-standing democratic institutions and individual rights. For the reasons set out above, the Law Society is not able to support the bill in its current form.”

Adam Searle, Labor’s spokesman has said “The right to protest must be reserved for future generations.”

This article (New Anti-Protest Laws: Australia Fights for the Right to Fight) is a free and open source. You have permission to republish this article under a Creative Commons license with attribution to the author AnonWatcher and AnonHQ.com.