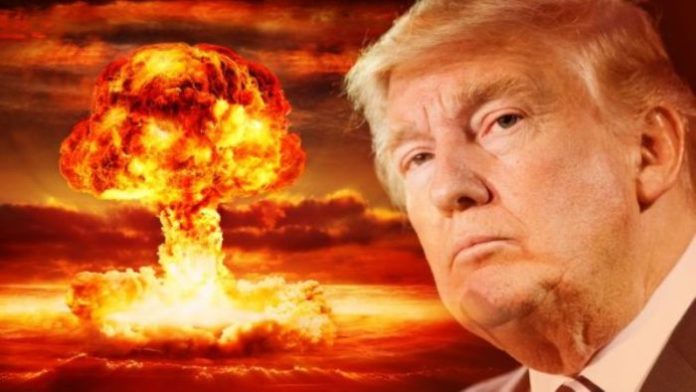 Earlier this year, former Soviet leader Mikhail Gorbachev warned in an interview that the NATO military buildup along Russia’s borders in Eastern Europe shows a nuclear war is just around the corner. He urged both NATO and Russia to exercise restraint for the sake of world peace.

Mr Gorbachev’s comment was not directed against Russia. It was, rather, a direct statement to NATO, particular the U.S., which has spearheaded the deployment of heavy weapons along Russia’s doorstep.

At a NATO summit in the Polish capital Warsaw, in July 2016, the organization promised to deploy troops to Eastern Europe to defend its allies. NATO claimed then, that the deployment was purely a defensive measure, and that Moscow should not consider it as something that will plunge the area into chaos. But Russia has repeatedly warned that any NATO military buildup in Eastern Europe could jeopardize the peace and stability of the region.

Despite the Kremlin’s grave concerns, in November 2016, the Pentagon announced its approval of over 600 containers of ammunition earmarked for Eastern Europe via Germany. According to U.S. defense officials, the shipment is the largest ammunitions shipment to be sent to the area in more than 20 years.

Having deployed the weapons, in January 2017, U.S. and NATO military generals dropped a bombshell at a press conference. The generals told reporters that they are preparing for World War III with Russia in the very near future. If the U.S. wants peace with Russia, it must prepare for war in Europe. They are convinced that war is a peace-making endeavor. Major General Timothy McGuire, deputy commander of the U.S. military in Europe, told reporters when asked if the large deployment was meant to send a message to Russia, he said: Since the statement was made, deployment has continued. The U.S. has gone one step further, now installing an Anti-Ballistic Missile (ABM) system on the eastern front. It also increased warship patrols close to Russia’s borders.

After critically analyzing the U.S. and NATO‘s activities on its borders, Russia has said the Western force led by the U.S. is planning a surprise nuclear attack on the country.

Speaking at a disarmament conference in Geneva, deputy head of operations of the Russian General staff Viktor Poznikhir said the United States’ ABM sites in Europe, and its warships patrolling close to Russia, are signs that the U.S. wants to launch an overwhelming surprise nuclear strike against Russia.

“The presence of American ABM sites in Europe and ABM-capable ships in the seas and oceans close to Russia’s territory creates a powerful clandestine potential for delivering a surprise nuclear missile strike against Russia,” he said.

The conference held in Switzerland was an international forum focusing on global security and the non-proliferation of weapons of mass destruction. A reported 65 countries participated in the event. According to Poznikhir, the United States’ anti-AMB system is provoking a new arms race. He explained further that the U.S. has installed ABM systems in Romania and Poland, compromising Russia’s nuclear deterrence capabilities.

The general revealed that by 2020, the U.S. will have as many as 1,000 interceptor missiles at its disposal, threatening Russia and China’s missile capacity. He said this is likely to push Russia and China into increase their missile capabilities, thus leading to a new arms race, jeopardizing world peace.

Apart from sparking an arms race, Poznikhir also stated that the United States’ actions pose a risk to the peaceful use of space by other nations. He said the western nation is continuing to develop dangerous missile systems under a pretext of countering a perceived threat from North Korea and Iran, while ignoring concerns expressed by Russia and China.

“The presence of the global ABM system lowers the threshold for the use of nuclear weapons, because it gives the US the illusion of impunity for using strategic offensive weapons from under the protection of the ABM ‘umbrella’. The ABM shield is a symbol of the build-up of rocket forces in the world and a trigger for a new arms race,” Poznikhir said.

In addition to the military buildup on the frontiers of Russia, the U.S. has delivered the Terminal High Altitude Area Defense (THAAD) system to South Korea. Both Russia and China have requested that South Korea and the U.S. halt the installation of the advanced anti-ballistic missile system designed to shoot down short, medium, and intermediate ballistic missiles in their terminal phase. But the U.S. has ignored the request. It has now agreed with South Korea to activate the weapon earlier than planned. The U.S. claims that it is alarmed by North Korea’s increasingly provocative behavior on the Korean Peninsula, hence the deployment of the weapon to protect South Korean and U.S. military interests.

If you look at the U.S. military buildup closely, it appears the Russian general is right. The U.S. is preparing for a preemptive nuclear strike. The U.S. is living under the illusion of being threatened, hence the need to strike first.