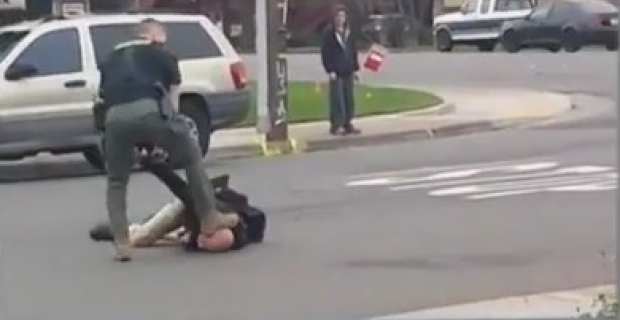 A Sacramento County Deputy has been put on paid administrative leave after holding a man’s head to the ground with his foot, and then beating him with a flashlight.

The situation was brought to the Sheriff’s Department when KCRA 3 obtained and sent a copy of the video to the agency. It was reported that another copy of the altercation had been sent to the department by someone else as well.

“There are portions of that video that clearly have caused me concern, and that is exactly what has caused the department to initiate an investigation, so we can get to the bottom of it.” However, Lewis additionally claims that the victim was resisting arrest. “Let’s face it, had the suspect complied with the officer’s directives from the initial contact and beyond, we wouldn’t be sitting here talking about this today.”

The Sheriff Department’s report is inconsistent with the statements from both the victim, John Madison Reyes, 51, and Michael White, the man who shot the video.

“I asked him kindly to move the car,” Reyes said. “He glared at me and stared at me. And then, I said an expletive, ‘You need to move the car because I can’t get through.’”

Apparently the situation escalated at this point after the officer inquired about Reyes being on probation.

It continues with Michael White’s account of the situation:

“The cop was walking around him and he tased him several times, and you could see the guy’s body convulse about three or four times. And he’s not yelling or anything. He was not trying to get away. I think [the officer] should get fired. I think he should go to jail. I don’t think administrative leave is enough.”

According to KCRA News Sacramento:

“Reyes was only cited and then released. His citation was for resisting arrest, not for anything he was doing before his confrontation with that officer.”