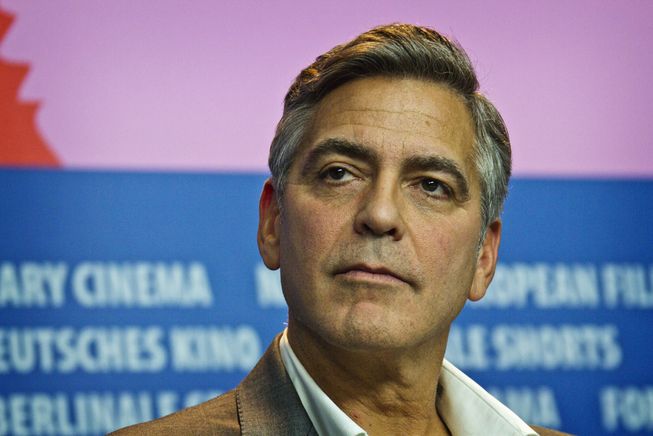 Wow. Just… wow. It seems George Clooney has taken to funding an initiative called THE SENTRY, and no, it’s not some blockbuster based on an overweight superhero who forgets his own identity in order to save the world (though the plot is probably just as convoluted). And yes, the name really is in all-caps.

What better way for a Hollywood heavyweight to pull in mass support for his idea than to convince us that it IS in fact a movie… but in real life…. THE SENTRY is apparently a noble initiative, designed to prevent evil from funding GENOCIDE, GENOCIDE I say (no, that is not a fictional arch-villain or another George Clooney initiative, it is in fact just all-caps for sarcastic emphasis)!

From the Enough Project, THE SENTRY is an initiative that “seeks to disrupt and ultimately dismantle the networks of perpetrators, facilitators, and enablers who fund and profit from America’s deadliest conflicts.” Wait, so he’s going to dismantle the military-industrial complex? Is George W Bush finally going to jail?  No?

Now, who on Earth could possibly be against genocide of all things? Or kittens at play??

Like any self-respecting superhero, he even has a satellite which he uses to spy on those evil genocide maniacs; In 2010, he founded the “Satellite Sentinel Project, which used satellites to map human rights violations”.

From the Satellite Sentinel Website: What do you get when you combine cutting edge imagery and data analysis? You get a game-changing project that uses technological innovations document, deter, and seek accountability for war criminals and mass atrocities.

SSP seeks to hold perpatrators of alleged mass atrocities accountable by documenting human rights crimes as they develop and unfold.

It seems his site has not been particularly successful at deterring any of the war crimes being spied upon in Sudan or Dafur, though it does release a nice report whenever these things happen. These reports are filled with satellite images, though it is difficult to say how it arrives at any of the conclusions it does regarding who is to blame, because these images lack the necessary detail and only capture scenes after the atrocity occurred. Basically it is an apparently well-intentioned effort that obtains no real evidence and has not achieved anything. It documents what the world already know, but has chosen to ignore anyway.

Anyway, back to th-, I mean THE SENTRY, it seems that this initiative is centered around that same problem area of Sudan, which is a rather narrow focus considering the fact that you could just as easily do this sort of thing for the biggest boogeyman of all: ISIS. Perhaps they might even find out why ISIS is largely funded by US allies Saudi Arabia and Turkey, or why US arms, Humvees and even tanks keep getting “captured”.

But no, let’s not focus on an area of the world the US has screwed up, and focus on one which it is itching to get into.

Using open source data collection, field research, and state-of-the-art network analysis technology, The Sentry will produce evidence-based analysis and focus on how these conflicts are financed, sustained, and monetized.

So, using Facebook, a few guys with a video cam and a really well-paid guy on a very fluffy arm-chair, THE SENTRY will attempt to arrive at subjective conclusions on how evil doers get their money…

Cue uninformative video filled with hyperbole and inspiring words, accusations of villainous doings, and yet which offers nothing in the way of concrete actions:

He has the right idea though; small interest groups have often profiteered from conflict by supplying arms and bombs to both sides, enabling an endless stream of war and thus revenue. The problem is, that George Clooney’s noble cause will align itself with one of the biggest war-profiteers that exists: The US of A.

From FP:
To disrupt and dismantle these war economies, a transnational effort led by the United States is needed to trace, seize, and return the ill-gotten gains of the networks of perpetrators and facilitators who fund and profit from these

Other flaws of this B-rated movie are well-known: “I don’t see much evidence of partnership with Africans in The Sentry, let alone African leadership,” Alex Perry, a freelance journalist and contributing editor to Newsweek, told Al Jazeera by email.

“There are plenty of Africans capable of running this kind of initiative – and you have to think that, since they’re on the ground, they’d be best placed to do so.”

Efforts like these work to misdirect attention away from the real institutions and even governments that fund conflict, choosing to offer some fictional narrative that somehow evil individuals (rather than institutions filled with them) are the cause of the problem.

It’s great to hear that some of the millionaires of Hollywood are taking an interest in something charitable, but so far much of this has only provided the man with good PR, and not much in the way of tangible results or much of a real commitment to facing up to the real financiers of terrorists. Instead, support this guy: