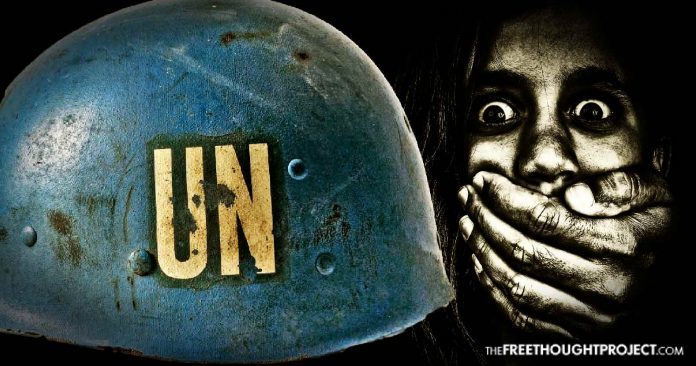 An Associated Press investigation has revealed more than 2,000 cases of pedophilia, sexual abuse, rape rings, and child sex trafficking between 2004 and 2016, was conducted by United Nations peacekeepers around the world. Over 300 of the sexual exploitation cases involved children. However, the names of a large number of troops found guilty were kept confidential, and only a fraction of the perpetrators were sent behind bars for their crimes.

Alleged abusers came from Bangladesh, Brazil, Jordan, Nigeria, Pakistan, Uruguay and Sri Lanka. More countries may have been involved, but the United Nations only started disclosing alleged perpetrators’ nationalities after 2015.

In Haiti, the AP found, girls and boys as young as 12 — who begged and scavenged for food on a daily basis — were given snacks and cookies in exchange for sex.  At least 134 Sri Lankan peacekeepers were found guilty of raping nine children — who hadn’t even reached puberty. They were also guilty of running a pedophile ring and passing around the Haitian children from soldier to soldier between 2004 and 2007. Of the 134 culprits, 114 were sent home, but none were ever imprisoned.

“The sexual acts described by the nine victims are simply too many to be presented exhaustively [in this report], especially since each claimed multiple sexual partners at various locations where the Sri Lankan contingents were deployed throughout Haiti over several years.”

“I did not even have breasts,” V01 (Victim No. 1), who had sex with nearly 50 UN peacekeepers between age 12 and 15, told investigators. Janila Jean was just 16 when a Brazilian peacekeeper lured her to a U.N. compound with a smear of peanut butter on bread, raped her at gunpoint and then left her pregnant.

V02, who had sex with a Sri Lankan commander at least three times, told investigators the peacekeepers taught her Sinhalese so she could understand and express sexual innuendo. 14-year-old V04 had sex with the soldiers every day in exchange for money, cookies or juice.

Three Pakistani nationals attached to the U.N.’s police units in Haiti, were involved in the rape of a mentally disabled 13-year-old in the northern city of Gonaives. The pedophiles were tried in a Pakistani military tribunal, and eventually sent back to Pakistan; but only one abuser was imprisoned – for a year.

Not only the children living in poverty, but impoverished women abandoned on the streets were either raped (impregnated and left to fend for themselves) or forced to have what is euphemistically called “survival sex” in a country where most people live on less than $2.50 a day.

Many of the victims were exposed to a deadly cholera strain, which killed an estimated 10,000 Haitians, from being sexually abused by the Nepalese peacekeepers.

Haitian lawyer Mario Joseph, who has been trying to get child support for about a dozen Haitian women left pregnant by peacekeepers, told the AP: “Imagine if the U.N. was going to the United States and raping children and bringing cholera. Human rights aren’t just for rich white people.”

Though United Nations peacekeepers have been credited with training the local police, providing security to the judiciary, and saving lives during the devastating 2010 earthquake; they’re the ones blamed for wreaking havoc in Haiti and causing children to have nightmares for the rest of their lives.

“I’d like to see my attacker face to face and tell him how he has destroyed my life. They’ll look at this as one big joke. As far as the U.N. goes, they came here to protect us, but all they’ve brought is destruction,” says 21-year-old Melida Joseph, who was raped by a U.N. peacekeeper, narrowly escaped being gang-raped in a seaside slum, yet never reported the crime — out of fear she would be blamed, or worse, would meet her abusers again.

The United States, the biggest financial contributor to U.N. peacekeeping, has asked the U.N. and countries (that contribute troops to peacekeeping missions) to take steps to ensure “these abuses must stop.”

“The children were passed from soldier to soldier. One boy was gang-raped in 2011 by peacekeepers, who disgustingly filmed it on a cell phone. What do we say to these kids? Did these peacekeepers keep them safe?

“The United States will continue to push for accountability for soldiers accused of sex abuse in Haiti and other missions. We owe it to the vulnerable in these countries, who desperately need peace and security. Countries that refuse to hold their soldiers accountable must recognize that this either stops, or their troops will go home and their financial compensation will end.”

This article (SHOCKING: UN Troops Raped 300+ Children, 1700+ Women in Peace Missions Across the World) is a free and open source. You have permission to republish this article under a Creative Commons license with attribution to the author and AnonHQ.com.