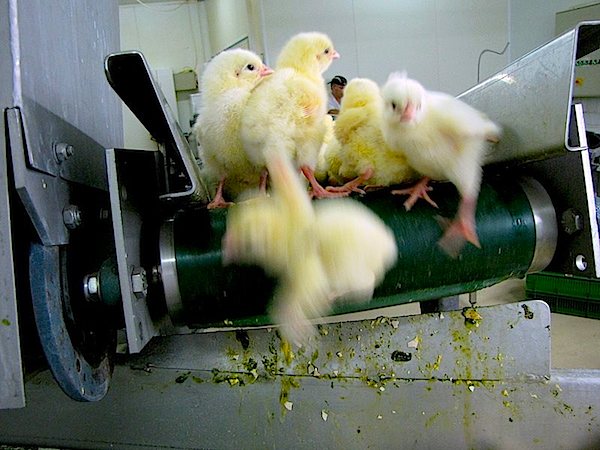 A new study found that a majority of those surveyed had no idea that female cows must be pregnant to give milk and that baby male chicks at egg farms are killed when they are just a day old.

For decades, meat has been a staple of the US diet with many Americans eating meat during every meal, every day. Though US meat consumption has declined slightly in recent years, Americans still consume about 198.5 pounds of meat per capita annually. Only Australians have a stronger appetite for meat. Despite the massive amount of meat consumed annually, many are impressively unaware of standard industry practices, many of which are barbaric, to say the least. A new study commissioned by UK-based vegan charity “Viva!” found that a majority of those surveyed showed little awareness of what animals endure on factory farms, even though 83% of respondents felt they were “clued in” about the process.

On industrial egg farms, for instance, it is standard practice to kill all male chicks born on egg farms when they are just a day or two old. However, two-thirds of people were unaware of this common industry policy. Interestingly, upon learning of the fate of male chicks, 69% of respondents believed the practice should be made illegal. In addition, a third of those surveyed did not know that dairy cows are sent to slaughter once their milk yield begins to drop. Yet, 60% did not even know that cows must be pregnant in order to produce milk. One in ten respondents wrongly believed “retired” dairy cows were sent to animal sanctuaries or lived out the rest of their lives on the farm.

Others were convinced that other common industry practices were illegal, such as the keeping breeding sows in crates that render them immobile, the amputation of piglets’ tails, and the removal of piglet teeth with pliers. Many also thought it was illegal to shoot and kill male dairy calves. Yet, all of these practices – and more – are legal and standard practice on farms in the US and Europe. Many of those surveyed were genuinely shocked and appalled upon learning of these industry practices, with about half of respondents saying they would consider cutting back on animal products to lessen the suffering of farm animals. 16%, however, said they would give up meat and dairy completely.

Julia Gellatley, the founder and director of Viva!, explained the survey’s results saying that “most people are so far removed from the reality of industrialized animal farming that they have no idea how food gets from farm to plate. All the practices which they found shocking are entirely legal so we have an enormous moral guild between producers and consumers.” Gellatley went on to say that this is likely intentional on the part of meat producers as “the consequences of having an educated public would be dire for the farming industry.” A series of recent studies from the University of Oslo back up this claim. The studies, published in the journal Appetite, found that people are more willing to eat meat or use other animal products when it’s processed and presented in a way that distances the product from its animal origins. In some cases, showing a cooked animal without the head was all that was needed to greatly reduce empathy.

This article (Study: Millions Still Clueless About Industrial Farming Practices) is free and open source. You have permission to republish this article under a Creative Commons license with attribution to the author and TrueActivist.com