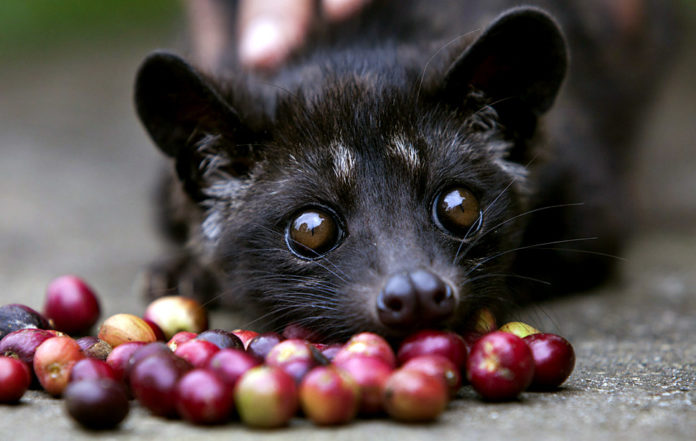 The rarest and the most expensive coffee in the world — Civet coffee, which costs as much as $300 per pound and up to $100 per cup — is made from coffee beans that are partially digested and excreted by Indonesian palm civets. The civet’s digestive enzymes ferment the beans; and when they are extracted from the feces, they make a less-acidic, dark and smooth cup of coffee with caramel-like taste.

Basically, the world’s costliest coffee comes from poop, but that’s not the ugly truth. The truth is Civet coffee — also known as kopi luwak, its Indonesian name — is sourced from small, mongoose-like creatures that are force-fed a debilitating diet in tiny cramped cages. Chris Shepherd, deputy regional director of the conservation NGO Traffic south-east Asia, told The Guardian:

“The conditions are awful, much like battery chickens. The civets are taken from the wild and have to endure horrific conditions. They fight to stay together but they are separated and have to bear a very poor diet in very small cages. There is a high mortality rate and for some species of civet, there’s a real conservation risk.

“It’s spiraling out of control. But there’s not much public awareness of how it’s actually made. People need to be aware that tens of thousands of civets are being kept in these conditions. It would put people off their coffee if they knew.” The shy cat-like nocturnal animals, which usually live up high in the forests, only occasionally eat coffee beans. They are carnivores that normally eat rats, bird’s eggs, and lizards; but in civet farms they are almost exclusively fed coffee berries, which lead to infections, tumors, extreme digestive problems, and even death.

Historically, kopi luwak was made using palm civet droppings harvested in the wild. But to meet the growing demand of the world’s most expensive coffee (an estimated 50 tons of mass-produced civet coffee from Indonesia, Vietnam, the Philippines and China flood the international market every year), the civets are now held captive and caged under appalling living conditions.

In 2013, a BBC undercover investigation revealed how coffee from caged civets in inhumane conditions ends up labeled as wild civet coffee in Europe.

Many retailers sell the product as “wild”, sourced in the jungle from the droppings of free-roaming animals. [But] Reporters witnessed battery-style conditions, animals in cramped cages and a severely injured civet cat, contradicting the “wild” claims marketed to consumers.

The same year, People for Ethical Treatment of Animals (PETA) Asia also investigated some of the civet coffee farms in Indonesia and the Philippines — two of the world’s top producers of kopi luwak — and revealed footages of sick, depressed civets suffering from infections and exhibiting signs of zoochosis, a stress–induced neurotic condition that causes captive animals to spin, pace, and bob their heads in constant frantic displays of frustration.

In 2015, former coffee trader Tony Wild and author of ‘Coffee: A Dark History’, who introduced kopi luwak to the Western world way back in 1991, launched an online petition and a Facebook campaign Kopi Luwak: Cut the Crap, to urge the connoisseur drinkers and Civet coffee manufacturers to shun the product. He told TIME:

“The coffee trade has conspired to turn a blind eye to the wildlife suffering in order to get this business going. It is a bit of a racket. I have seen 100 luwaks kept in a half-hectare coffee farm. It’s kind of a prison camp where they fight each other.”

Neil D’Cruze, one of the researchers, shared the grim findings with The National Geographic:

“Some of these cages were literally the tiniest — we would call them rabbit hutches. They’re absolutely soaked through with urine and droppings all over the place. Some of the civets were very thin, from being fed a restricted diet of only coffee cherries — the fruit that surrounds the coffee bean. Some were obese, from never being able to move around freely. And some were jacked up on caffeine.

“The most disturbing was the wire floor many of the animals were forced to stand, sit, and sleep on around the clock. If you’re standing on that kind of wire mesh all the time, it’s going to cause sores and abrasions. They have nowhere to go to get off that flooring. It’s a constant, intense source of pain and discomfort.”

Can the world’s most exotic coffee, which is threatening the wild civet population in Asia, be made sustainably and cruelty-free? Please share your thoughts in the comments section below and share this news…

This article (The Cruel Reality Behind The Most Expensive Coffee In The World) is a free and open source. You have permission to republish this article under a Creative Commons license with attribution to the author and AnonHQ.com.