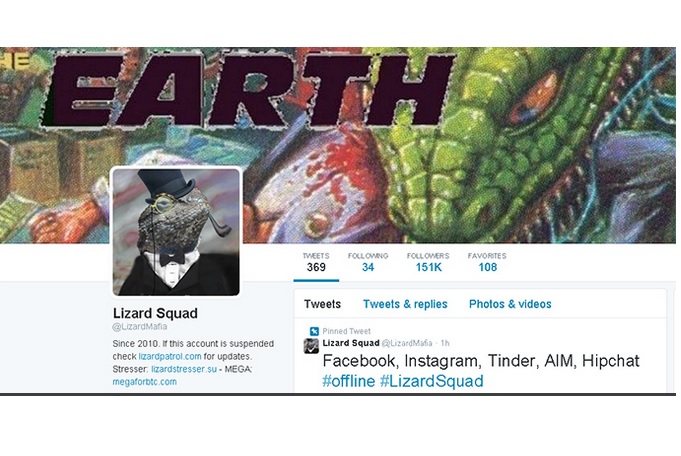 The reported ‘glitch’ that brought down Facebook , Instagram and Tinder in Asia, the US, Australia and the UK for no less than 40 minutes on January 27 was not caused due to any ‘self-inflicted outage’ as stated by Facebook; the social media platforms were in fact hacked by Lizard Squad which just a day ago took down Malaysia Airlines website for no rhyme or reason.

The ‘attack’ affected access from PCs and mobile versions of both websites; the social media giant’s Instagram service was also inaccessible. Attempts to access Facebook and Instagram over multiple sites had returned “this webpage is not available” and on Safari, “the server where this page is located isn’t responding”. “Sorry, something went wrong. We’re working on it and we’ll get it fixed as soon as we can,” said a message on the Facebook website. The dating app Tinder, which relies on Facebook to provide its service, was also affected. Later Facebook in a statement said: “Earlier today many people had trouble accessing Facebook and Instagram. This was not the result of a third party attack but instead occurred after we introduced a change that affected our configuration systems. We moved quickly to fix the problem, and both services are back to 100% for everyone”. This image shows how the ‘attack’ unfolded: Social media addicts freaked out on Twitter to complain and joke, and soon hashtags like #ThingsIDidWhenFacebookWasDown #facebookdown and #SocialMeltdown2015 started trending:

#ThingsIDidWhenFacebookWasDown Wasted minutes of my wild and precious life on #Twitter, instead of wasting them on #Facebook. #facebookdown

Facebook is down? Maybe time to get some fresh air? #facebookdown pic.twitter.com/UnLvepJgUy

Yes, FB & Insta are down. No, it’s not a police matter. Yes, we’re enjoying the break from baby & food pictures. No, we can’t arrest anyone.

Things to do during #SocialMeltdown2015 1. Take a selfie 2. Melt down further because we can’t instagram it. . #facebookdown #instagramdown

“What did you do while Facebook was down, Grandpa?” The old man’s voice trembled. “I tweeted.”

Let us reflect on the tragic events of #SocialMediaMeltdown2015 by looking at status updates we tragically never saw. http://t.co/X7Ymjgvbsl

How Facebook Addicts should handle the outage #facebookdown pic.twitter.com/mZMMqVUeqv