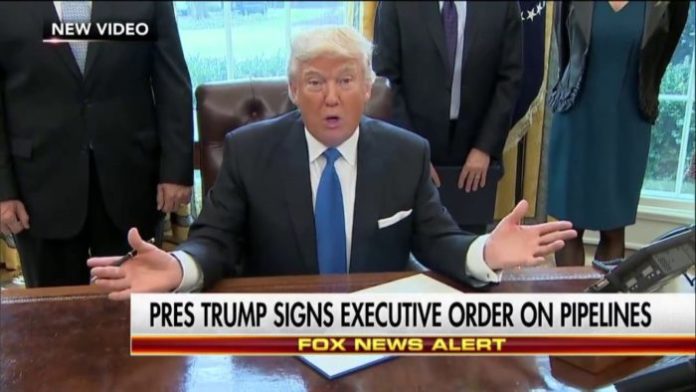 When the construction of the Dakota Access oil Pipelines (DAPL) began in August 2016, many Native American tribes from Wyoming, Colorado, and even as far as Oklahoma, joined the Standing Rock Sioux Tribe in North Dakota to protest the construction. Apart from protesting in North Dakota, protesters also held demonstrations in major cities of the United States, stating unambiguously that the construction of the pipeline would destroy their sacred and ancestral lands. In North Dakota, many gross human rights violations were carried out by security officials against peaceful protesters.  Dozens of peaceful protesters were arrested, including even the Chief of the Standing Rock Sioux Tribe, David Archambault II. Mercenaries working for the DAPL, but disguised as security officers, deployed dogs to attack peaceful protesters. When the issue began to attract international attention, the construction was temporarily halted.

However, just four days after taking office, President Donald Trump signed orders to advance the approval of the DAPL. Trump’s actions showed clearly his total disregard to the plight of Natives in the United States. Trump is rumored to be a White Supremacist. Whereas we can’t substantiate this rumor, we can make assumptions based on his policy towards other races. Looking closely at the executive orders of Trump on the DAPL, it appears his beliefs on Natives are not far from those of his ancestors—the early European conquerors of the Americas.

In fact, when Europeans came into contact with natives of the Americas, it was a literal disaster. Europeans plundered their continent. In the years before Christopher Columbus and his band of desperados (criminals) arrived in the Americas, Europe was in a mess. There were rampant wars, poverty, diseases and famine. Therefore, when news spread in Europe that a new land has been found elsewhere, Kings and Queens on the continent gathered their forces to claim their take of the land.

Those early Europeans believed the Natives had no right to their lands—just like Trump’s belief the Standing Rock Sioux Tribe has no say in their lands. From the colonial period of the early 1500s through to the twentieth century, natives of the Americas experienced massacres, torture, European deadly infectious diseases, terror, sexual abuse, systematic military occupations, removals from their ancestral territories, forced removal of Native American children to military-like boarding schools, allotment, and a policy of termination. In short, Europeans committed genocide against Native Americans. Although this has deliberately been removed from history books, many historians agree that this particular genocide is the biggest ever committed in human history.

In September 2016, a first genetic study conducted on the peopling of the Americas revealed that European colonization wiped out Native American populations to extinction. The University of Adelaide’s Australian Centre for Ancient DNA analyzed the DNA of pre-Columbian mummies and skeletons to reconstruct a genetic history. The researchers found that there is a “striking absence” of those genetic lineages in modern Native Americans and the mummies analyzed, pointing to an extinction event that coincides with the Europeans arrival in the Americas.

Before this study, scholars have estimated that prior to Europeans contact with Native Americans, the population of Natives was over 145 million. The population was thriving. Natives were advanced in medicine, arts, construction, the cosmos and much more.

They knew how to protect their lands so that it could continue to sustain them. What they lacked was sophisticated warfare capable of killing people en mass. But Europeans by that time, had mastered the evil craft of killing vast amounts of people efficiently. In just around two centuries of Europeans coming into contact with Native Americans, the population of indigenous Americans declined by 90-95 percent. Of course, this is the most dramatic decline of population in the history of our planet.

David Stannard, American historian and Professor of American Studies at the University of Hawaii, explained in his book American Holocaust that the native people were caught between imported plagues and barbarous atrocities, which resulted in the annihilation of 95 percent of their population. Professor Stannard expressed his shock to such horrendous crimes committed by Europeans, emphasizing that the perpetrators of the American Holocaust drew on the same ideologies as would the later architects of the Nazi Holocaust. Does this ring a bell in the ears? Some that are critical of Donald Trump have compared his actions to that of Adolf Hitler? As we keep saying, nothing is really new under this sun. All that is happening today happened yesterday. The forced seizure of Native lands by the American government is only a reflection of the past. Over 100 million innocent Natives lives were destroyed by Europeans. Today, their lands are being occupied by Europeans, and they can’t even have a say in their dwellings.

This article (Trump Advancement of DAPL: Reminder of Europeans Murdering 100 Million Native Americans) is a free and open source. You have permission to republish this article under a Creative Commons license with attribution to the author and AnonHQ.com.